Newsflash! Scientists Can Use WiFi to Count Your Breaths and Spy on You 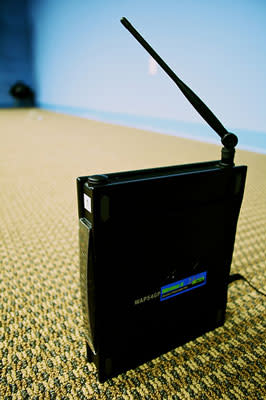 I sense a disturbance in the Force...

Swimming through a sea of wireless radio waves is de rigeur these days (in fact, you have to move to West Virginia if you think you're allergic to them

). But your body leaves a wake in that sea, and watching it can let observers count your breaths per minute, says a researcher who surrounded himself with twenty wireless units to test the idea

. Cute, right? But it also means someone on the sidewalk can tell from disturbances in the wireless where you are in your house, and track you as you move from room to room. A little less cute. The paper, which hasn't been published yet and is available on the ArXiv

, looked to see whether the wireless wake the authors had noticed in previous experiments could be used a medical setting to keep tabs on surgical patients, who occasionally stop breathing after procedures under general anesthesia. Computer scientist Neal Patwari lay in a hospital bed surrounded by transmitters on the same frequency as WiFi and found that after 30 seconds of calibration, the setup could estimate his breaths per minute with an error of just 0.3 breaths. Current methods of breath monitoring are already very reliable, though, according to an outside engineer interviewed by New Scientist

. But the phenomenon could have use in surveillance. Especially since the team has previously found that a body's disruption of wireless waves is detectable through walls

, making it possible to track people's movements from outside. It had seemed that keeping still might foil outside observers, but given that a breath appears to be enough movement to be detectable, that escape is no longer possible. Yay?