Newsflash: Gravity is Now a Little Weaker; Mass of Proton a Bit Smaller 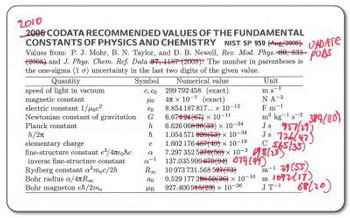 Whip out that red pen and make just a few...little...tweaks...

The physical world should feel a little more comfy now: Gravity is a little bit less than it was last Thursday. And the electromagnetic force? A smidge stronger. Every four years, the National Institute of Standards and Technology posts internationally determined adjustments to the official values of such natural constants to reflect more accurate measurements made possible by advancing technology. This week, in the latest update

, the radius of a proton

, the speed of light

, and many, many others have received facelifts that will decrease uncertainty in physics measurements. But this update will also affect units much closer to home: In October, the General Conference on Weights and Measures will vote on a measure to base the definition of a kilogram on the values of such natural constants

, instead of the 130-year-old slug of platinum and iridium that currently holds the title. For the time being, the current upgrade will likely trickle down to we armchair physicists once Google Calculator, the search giant's handy-dandy constant provider

, starts using the new numbers. Judging from its current value for the Planck constant, it's still working from the 2006 data. Image credit: Mohr,Talbott/NIST