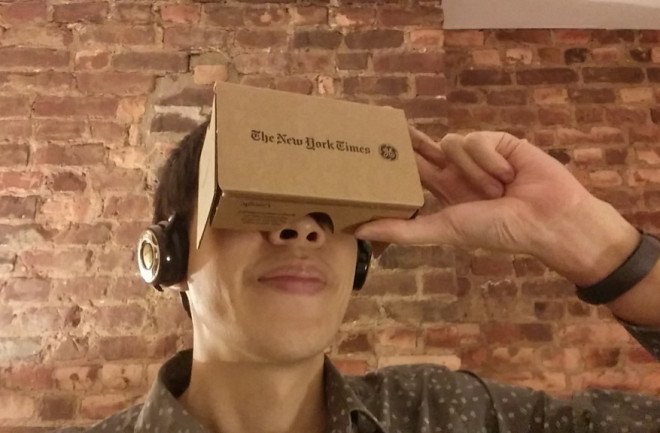 Credit: Jeremy Hsu What looks goofier than someone trying on a virtual reality headset? Maybe an entire room of well-dressed journalists and other attendees holding cardboard virtual reality headsets to their faces and swiveling their heads in every direction. That was the scene from the premiere of a virtual reality experience called "The Displaced" created for a new New York Times VR app. But there's nothing silly about the New York Times effort to make virtual reality journalism go mainstream. The venerable publication sent out more than one million virtual reality (VR) headsets to newspaper subscribers—promoted as the largest VR launch in history—to coincide with home delivery of New York Times Magazine during the weekend of Nov. 7. "The Displaced" VR documentary story gives viewers a close look at the lives of three children chosen to represent the 30 million refugee children across the world. It's not the first piece of VR journalism ever, but it's probably the first to try reaching a broader audience of news consumers who may have never tried on a VR headset or even played around with YouTube's 360-degree videos before. Such a mass-market scenario is exactly what the Google Cardboard VR headset was designed for. Many companies offer the basic materials or prefabricated versions for under $10; I recently bought my own headset online. Some handy folks may even build their own headsets. By making basic VR experiences accessible at very low cost, Google has already done much to lower the barrier for trying VR. People don't need to spend hundreds of dollars on an Oculus Rift or similar high-end VR headsets; all you need is Google Cardboard and a smartphone capable of downloading and running VR apps. The New York Times is taking the gospel of VR one step farther by actively distributing Google Cardboard headsets to its subscribers. That single step expands the VR audience beyond tech-savvy or simply curious people willing to buy the inexpensive headsets for themselves. It puts Google Cardboard in the hands of newspaper subscribers and magazine readers who may not even read much of their news online through their computers or smartphones. In that sense, it should be interesting to see if the New York Times follows up with any statistics on the numbers of people who download and use the new VR app.

Attendees of the New York Times VR app launch event try out "The Displaced" experience on Google Cardboard headsets. Credit: Jeremy Hsu During the launch event, the New York Times provided free copies of Google Cardboard headsets to attendees. Jake Silverstein, Editor in Chief of New York Times Magazine, encouraged everyone to press play on "The Displaced" VR story at the same time so they could all experience it together. It seemed both funny and a bit strange to try coordinating a communal experience for a crowd of people wearing VR headsets. After all, the magic of VR's immersive power comes from you, the individual viewer, having control over where you look in the VR experience. Each person can experience the same VR story in a slightly different way each time. The idea of a launch event also felt somewhat goofy because I had already experienced the same VR story at home. The NYT VR app with "The Displaced" had become available online earlier the same day, so I had simply downloaded it and watched it with my own previously-purchased Google Cardboard headset. That act of downloading and watching the VR experiences on your own headset will almost certainly be how most people get their VR kicks in the near future. Live demonstrations involving crowd VR experiences will more likely be the exception rather than the rule. Still, I appreciated the spirit behind the New York Times VR app launch event. As I said before, it's partly about reaching out to an audience that may never have bothered to even give VR headsets a try. But the New York Times also clearly wants to make a statement about how VR experiences can do more than just entertain us with Hollywood-style fiction or games. Its story of "The Displaced"—created in cooperation with VR production company Vrse—represents an intimate documentary journalism experience which follows each refugee child through their daily acts of survival and play in Ukraine, Syria and South Sudan. Ultimately, the goal of such VR journalism is to leverage VR's power as an empathy machine capable of telling stories as never before. Chris Milk, CEO of Vrse, told the audience at the NYT VR app event of how virtual reality can remove one of the final barriers between storyteller and subject. No longer will audiences simply sit by the fire and listen to a master storyteller recount a mammoth hunt. Instead, VR can trick human eyes and ears to put the audience right in the middle of the action. The New York Times VR app launch coincides with two other big VR initiatives. First, The Associated Press debuted its own documentary-style VR experience about a Calais migrant camp in northern France in cooperation with a VR studio called RYOT. Second, YouTube announced the debut of a VR video format that allows viewers to easily switch into VR mode for certain videos. The message from all those news organizations, VR studios and tech giants seems clear; VR could become both serious journalism and serious business.