New Web Site Is Like LinkedIn, But With More Anonymous Slander 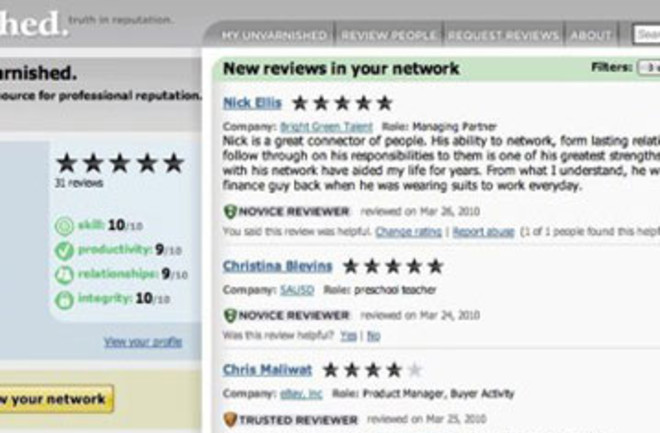 With so much personal information floating around the Internet, managing an online reputation can be a challenge, especially for people looking for a job or hoping for a promotion. Professional networking sites like LinkedIn have helped people manage their reputations by allowing them to post tightly controlled professional profiles--on LinkedIn, users can request recommendations from colleagues, which they can first approve before posting them on their profiles. But while those profiles are useful, some people see them as a little more than organized puffery. Soon, however, more daring professionals can also use the services of Unvarnished--a controversial new Web site where users can leave anonymous reviews of a person's work. Billed as Yelp for people, the site is built on user-generated reviews, and it aims to present an "unvarished" picture of a worker's strengths or weaknesses. So far, the reviews of the beta version of the site have been scathing. Apart from being named "

, the site has also been described as a "

The site, created by Peter Kazanjy, is currently available by invitation-only and was released in its beta form a few days ago. You can either join a waiting list or wait for someone to send you an invite via Facebook, asking for a review. Once you connect, you have to submit a review for your account to be activated; that allows you to "claim" your profile--because if someone has already submitted a review of you, your profile already exists. Once your profile exists you can request reviews of your work. And of course, you can submit as many anonymous reviews as you like. If someone posts a nasty review of your work, however, the site does not allow you the option of removing the post or deleting your profile, leading some to worry that the anonymous reviews opens the forum up to personal vendettas and

amplifies everything that is awful about the web right now: anonymous, drive-by, ad hominem attacks that can't be erased or edited and that live in search forever [CNET].

After all, an endorsement from a top executive at a well-known company is going to be far more compelling than a negative review by a former entry-level co-worker who never worked with you directly. In the absence of any ability to truly assess a reviewers credibility (either through identity or review history), Unvarnished anonymous reviews have little to no inherent value [Econsultancy].

Other critics worry that Unvarnished may do more harm than good to professional reputations as people tend to magnify the negative;

an employee with 50 extremely positive reviews and 5 very negative reviews would be at a disadvantage against someone with no Unvarnished profile [Techcrunch].

Creator Peter Kazanjy stands by his decision to allow anonymous posts which cannot be deleted by the user, pointing out that other review sites such as TheFunded.com, where people can rate venture capitalists and Tripadvisor, where people rate hotels and vacation spots would be useless, if the business owners could delete negative reviews.

“The idea is to create a place, not where people only give F-minuses, but a place where people can feel comfortable to give B-pluses or A-minuses,” Kazanjy said. “Reviews then actually mean something" [Los Angeles Times].

There are some brave souls who are willing to give the new site a shot, describing it as a LinkedIn with teeth:

minus the sappy reviews people post to each others' profiles on that site. LinkedIn with teeth makes it seem more mundane, and that is the truth of the matter. Browse around a little and you'll calm down pretty quickly. Come back later when you're considering working with someone and you may find it useful [ReadWriteWeb].