The future of driving is all about connectivity, sleek designs and zero emissions. 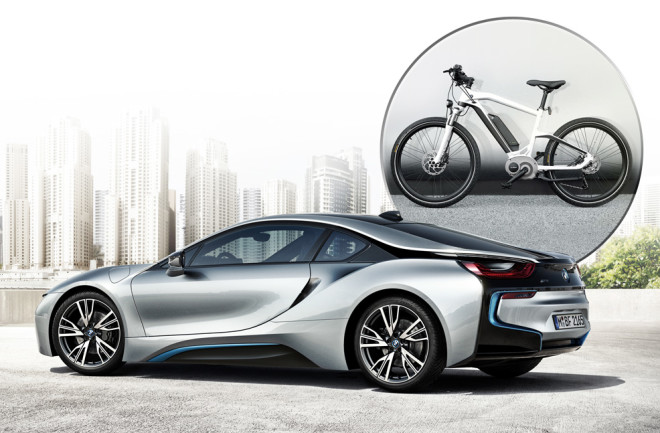 Is the i8 too steep for your budget? No worries. Hop on BMW's Bosch battery-powered Cruise electric bicycle for a mere $3,700 and change. | Inset: BMW Group PressClub Global; Photo: BMW of North America

Take a summer road trip into the future of driving: You can hop on an electric scooter designed for the modern urban jungle or get behind the wheel of a car that’s more connected than your LinkedIn profile. Want more? How about a super-posh hybrid and zero-emission fuel that’s a real waste.

Young urbanites are clamoring for a greener transportation option. India-based company Mahindra has heard their cries. The GenZe utility cycle’s zero-emissions electric motor doesn’t need tune-ups or oil changes, and its larger, 16-inch front tire offers extra stability on pothole-riddled streets. Dual position seating gives the driver the option of traveling in an almost standing position when greater visibility is needed (with, we hope, less dorkiness than a Segway).

Hits the road: later this summer

Drivers and their riders have access to high-speed mobile broadband and the A3’s zippy 4G LTE data connection, which can serve up to eight devices. Passengers can watch high-definition videos and make video conference calls in the car. (But please, not while driving!) Its new Picture Navigation service enhances driving directions in partnership with Google Earth 3-D satellite imagery. Not a fan of the mighty Quattro? General Motors will have several new models with 4G LTE later in the year.

Is the i8 too steep for your budget? No worries. Hop on BMW's Bosch battery-powered Cruise electric bicycle for a mere $3,700 and change. | Inset: BMW Group PressClub Global; Photo: BMW of North America

BMW’s first plug-in hybrid vehicle in the U.S. has a slick ad campaign featuring the voice of sci-fi icon Arthur C. Clarke — and the six-digit price tag is out of this world. The i8 does get 94 miles per gallon, and features all the usual bells and whistles from the luxe automaker.

Hyundai’s Tucson will be the world’s first mass-produced hydrogen fuel cell vehicle. The crossover utility vehicle can be refueled in less time than it takes to buy a gas station hot dog and supersize soda — not even 10 minutes — and has a 300-mile range. (By contrast, a typical zero-emission electric vehicle charges in three hours at 240 volts and goes 84 miles on a single charge.) The Tucson Fuel Cell will be available in Southern California, where most of the country’s hydrogen-friendly fueling stations are located. One of them, in Fountain Valley, is the world’s first powered by sewage.

[This article originally appeared in print as "Reinventing Our Wheels."]