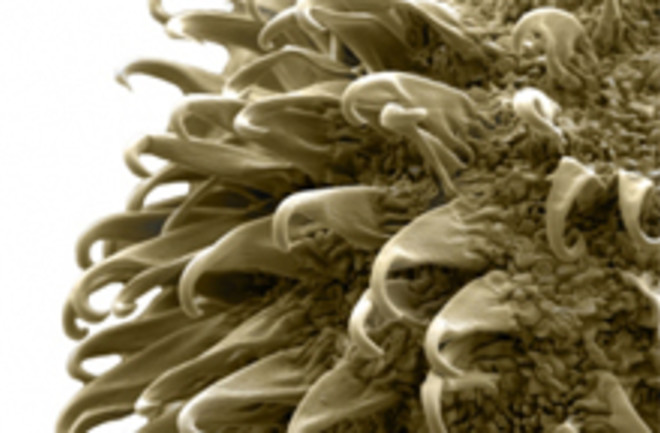 We've brought you stories of lab-created blood cells able to simulate red blood cells in humans, or to act like platelets in rodents and stop bleeding. Now, in a study soon to be published in the Proceedings of the National Academy of Sciences, comes a new, even smaller creation for our bloodstreams: A nanoparticle that could target and latch onto only the damaged cells in arteries around the heart to deliver drugs there. The MIT researchers, led by Robert Langer, have developed other nanoparticles to target cancer; this new particle they call a "nanoburr," named for those seeds covered in bristles or hooks that latch onto animals passing by.

Its nanoburrs are coated with proteins which can only stick to a structure in the blood vessel wall called the "basement membrane." This is only exposed when the wall is damaged, so only damaged sections of blood vessel are targeted [BBC News]

. Then the particle can slowly release the drug stored inside.

Each particle is just 60 nanometres across – 60 billionths of a metre – and consists of three layers. The inner core contains the drug in question bound to a long-chained molecule, or polymer. A middle layer made of fatty material separates this core from the outer coating of a polymer that protects the particle as it travels in the blood stream [The Independent].

Medical researchers covet this kind of targeted drug delivery not only because it could make treatment more effective, but also because it lowers the risk of exposing other parts of the body to potentially toxic treatments. While the nanoburrs in this case were designed to target damaged or hardened arteries and release drugs to combat atherosclerosis, Langer says the idea could be adapted to target any condition that deteriorates cell walls in a similar way, as some cancers and inflammatory diseases do. As usual, however, medical use in patients remains many years away. Related Content: 80beats: Golden Nanocages Could Deliver Cancer Drugs to Tumors 80beats: Lab-Built Red Blood Cells Look & Act Like the Real Deal 80beats: To Mend a Broken Heart, Researchers Start in the Stomach 80beats: Lab-Created Platelets Slow Bleeding in RodentsImage: MIT