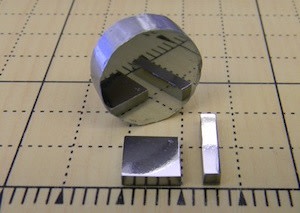 If you're reading this with a laptop sitting on your legs, you might have noticed that computers tend to warm up as they work, turning electrical energy into thermal energy. In fact, two-thirds of all the energy we use is lost as waste heat. Maybe, instead of just using the heat from your computer to keep your lap toasty, we should be harnessing that heat by turning it back into electricity. But the thermoelectric materials that convert thermal to electrical energy aren't very good at their job. While they have some applications

, the expense and inefficiency of current thermoelectric materials make them impractical for implementing at a large, power-saving scale. Until now: a new thermoelectric material might finally let us recover the energy lost to waste heat---at a reasonable price. To be thermoelectric, a substance must let electrons flow through it while blocking the movement of heat. Its success at doing so reflects its efficiency as a thermoelectric material, and is represented by a value called ZT. For large-scale applications, experts estimate that a thermoelectric material needs to have a ZT of at least 2 when it's at temperatures of around 900 to 1200 degrees Fahrenheit. Sure, that's way hotter than your laptop will ever get, but in the range of many other engines' temperatures. One way to improve a material's ZT is to tinker with its nanoscale structure, creating miniscule interruptions that prevent heat from flowing. But previous studies have tried this nano-structuring process on materials that naturally have relatively high ZT values, such as lead telluride

---and at best, the new materials only achieved a maximum ZT of 1.8. In the latest finding, published in the journal Nature

, researchers took nano-structured materials and further slowed down heat flow by creating larger---but still minute---obstacles at the mesoscale, a scale slightly larger than the nanoscale. In lead telluride with both nano-structuring and meso-structuring, the researchers measured a ZT of about 2.2 when the material was heated to around 1190 degrees Fahrenheit. 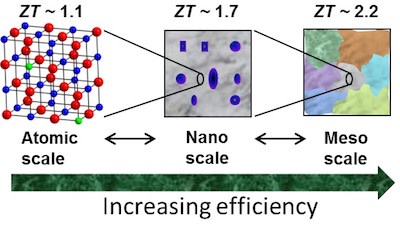