New Gesture Control Tech Works With Any Object — Even Pets 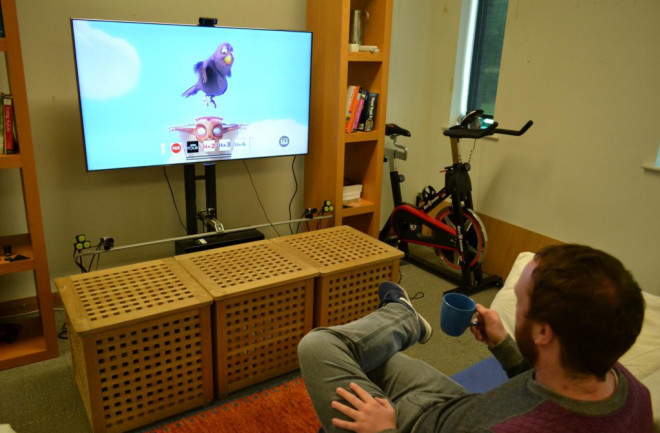 Lancaster University researcher Christopher Clarke selects a channel to watch by using his mug as a remote control. He moves his drink left or right until to find what he wants to watch. (Credit: Lancaster University) Take a look at the objects around you. Using a new gesture control technology, any one of those items—even your pets—could control your television. The remote will never be lost again! Researchers from England’s Lancaster University have developed a new technology called Matchpoint, according to a news release, which uses a webcam to sync movement with a TV screen. Each action, whether it’s changing the volume, channel or menu, is paired with a unique movement and object— they call the process “spontaneous spatial coupling.” While there’s other gesture control tech out there, Matchpoint software is different, its creators say. "Spontaneous spatial coupling is a new approach to gesture control that works by matching movement instead of asking the computer to recognize a specific object,” said Matchpoint developer Christopher Clarke, PhD student at Lancaster University's School of Computing and Communications, in the news release. Let’s say you want to change your TV channel: to increase the channel you move up, to decrease the channel you move down. All you have to do is pair that motion with an object or body part to get the job done.

Here you see three options — channel, TV guide, volume — in the corner of a TV screen. In order to perform one of those functions, just mimic the directional movement with either a body part or an object. (Credit: Lancaster University) "Our method allows for a much more user-friendly experience where you can change channels without having to put down your drink, or change your position, whether that is relaxing on the sofa or standing in the kitchen following a recipe,” Clarke stated. But this is what will really take this technology to a new level: “You could even change the channel with your pet cat," said Clarke. Clarke and his team will present the research behind this project later this month at the ACM User Interface Software and Technology Symposium.