: Scientists have created the first rechargeable battery that uses seawater and freshwater to generate electricity. If installed into every ocean-discharging river in the world (that's not a realistic scenario---just a frame of reference), the process could produce 2 terawatts, or about 13% of worldwide electricity use. As the researchers write, this battery is "simple to fabricate and could contribute significantly to renewable energy in the future." How the Heck: 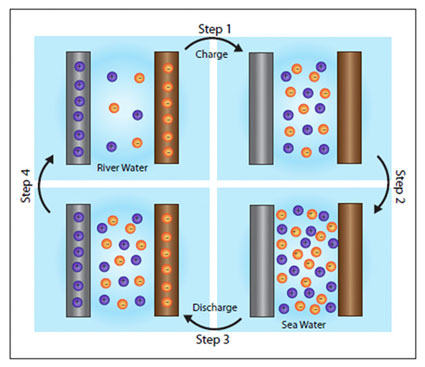 Next Up: Noting the limited supply of freshwater on Earth, lead author Yi Cui says that "we need to study using sewage water ... If we can use sewage water, this will sell really well." Reference: Fabio La Mantia et al. "Batteries for Efficient Energy Extraction from a Water Salinity Difference." Nano Letters. doi: 10.1021/nl200500sImage: Nano Letters