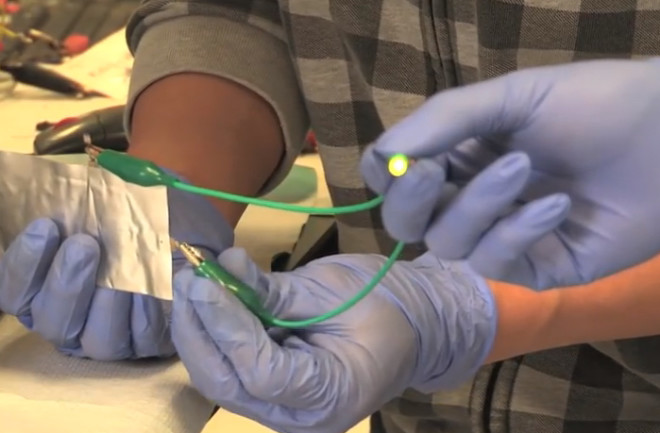 Decades in the Making

Aluminum is an attractive metal for batteries due to its low cost and high charge capacity, but attempts to build an aluminum battery over the past 30 years have largely failed. Past aluminum battery iterations didn’t pack enough juice to power devices, had extremely short life cycles and were susceptible to deterioration. Finding the right combination of materials to produce sufficient voltage after repeated recharge cycles has, to this point, eluded researchers. However, the team at Stanford cleared these hurdles by using graphite for the battery’s cathode, the place where current leaves the battery, and aluminum for the anode, the place where current flows into the battery. The researchers placed their aluminum anode and graphite cathode, along with an ionic liquid electrolyte, into a flexible polymer pouch. The combination yielded a high performing, cheap battery.

The Stanford team’s aluminum battery appears to fill in all the gaps left open by lithium-ion batteries, but there’s still work to do. Although the battery’s 2-volt output is the largest anyone has ever achieved with aluminum, it’s still not enough to power our popular handheld gadgets — the average lithium smartphone battery produces 3.7 or 4.2 volts. The team was able to produce 5 volts using two batteries and a converter, but that setup wouldn't fit as snugly into our devices. "Our battery produces about half the voltage of a typical lithium battery," Hongjie Dai, a professor of chemistry at Stanford, said in a news release. "But improving the cathode material could eventually increase the voltage and energy density. Otherwise, our battery has everything else you'd dream that a battery should have: inexpensive electrodes, good safety, high-speed charging, flexibility and long cycle life.” So hang in there avid texters, Tweeters, selfie-snappers and Candy Crushers, your days of living with battery anxiety are numbering fewer and fewer.