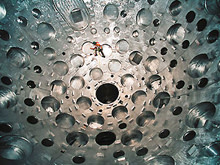 The hunt for fusion energy is one that has been plagued by false starts and overly-optimistic announcements. This week, however, researchers at the National Ignition Facility in California announced a major new step: firing all of its 192 lasers together for the first time, and channeling the beam into an area no bigger than a pencil eraser. That tiny target is called the hohlraum. It's a gold-plated cylinder intended to contain the hydrogen isotopes deuterium and tritium, which would fuse together during a potential fusion reaction. In this test, documented in the journal Science this week, the 192 lasers heated up the hohlraum to "only" about 6 million degrees Fahrenheit. But, team member Jeffrey Atherton says, the NIF is working its way up to the really powerful reactions.

. Particularly important is the fact that plasma in the hohlraum didn't block the materials from absorbing energy from the lasers, one of the key problems some researchers had predicted for fusion projects. Instead, the cylinder was able to absorb 95 percent of the energy. Says Mike Dunne of the U.K.'s Central Laser Facility:

"I can't overstate how dramatic a step that is. Many people a year ago were saying the project would be dead by now" [BBC News]

. As the NIF's name would imply, what the scientists are really after is the ignition of a true thermonuclear reaction. And Atherton, an eternal optimist, says they could start ignition tests this summer, now that the laser tests have proven successful.

To achieve that thermonuclear reaction, the scientists will attempt to use the lasers' immensely powerful beams to reach temperatures of more than 200 million degrees Fahrenheit and pressures millions of times greater than Earth's atmosphere - conditions found only in the interior of the sun and stars [San Francisco Chronicle]

. But, as with all fusion energy project, don't expect too much too fast.