Amy Shira Teitel is a freelance space writer whose work appears regularly on Discovery News Space and Motherboard among many others. She blogs, mainly about the history of spaceflight, at Vintage Space, and tweets at @astVintageSpace.

Last week, NASA announced its next planetary mission. In 2016 the agency is going back to the surface of Mars with a spacecraft called InSight. The mission’s selection irked some who were hoping to see approval for one of the other, more ambitious missions up for funding: either a hopping probe sent to a comet or a sailing probe sent to the methane seas of Saturn’s moon Titan. Others were irked by NASA’s ambiguity over the mission’s cost during the press announcement. 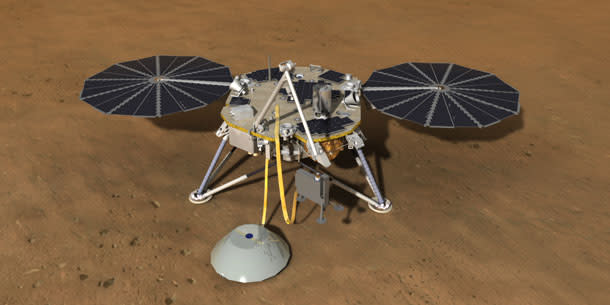 An artist's rendition of InSight deploying its seismometer and heat-flow experiments on Mars.

is part of NASA’s Discovery program

, a series of low-cost missions each designed to answer one specific question. For InSight, that question is why Mars evolved into such a different terrestrial planet than the Earth, a mystery it will investigate by probing a few meters into the Martian surface. The agency says InSight’s selection was based on its low cost—currently capped at $425 million excluding launch costs—and relatively low risk. It has, in short, fewer known unknowns than the other proposals. But while InSight costs less than half a billion itself, the total value of the mission by the time it launches will be closer to $2 billion. How can NASA get that much zoom for so few bucks? By harnessing technologies developed for and proven on previous missions. The research, development, and testing that has gone into every previous lander take a lot of guesswork out of this mission, helping it fly for (relatively) cheap. Aside from the Moon, Mars is the only body in the solar system that NASA has landed on more than once. With every mission, the agency learns a little more, and by recycling the technology and methods that work, it's able to limit expensive test programs. This has played no small part in NASA’s success on the Red Planet thus far. When it comes to the vital task of getting landers safely to the surface, NASA has been reusing the same method for decades. It has its roots way back in the Apollo days.

A mosaic of Mars' Chryse Planitia created from images taken by Viking 1.

, a pair of twin landers

that reached the surface in 1976. Each was sent to Mars with an elaborate, three-stage system for slowing the craft down for a gentle landing. The first stage was an aeroshell, a case designed to create enough drag to slow the lander's descent without building up too much heat from atmospheric friction that it melted the instruments inside. For the second braking mechanism, NASA took advantage of the fact that Mars, unlike the Moon, has an atmosphere—they used a parachute. And the final descent was made with the help of retrorockets, which fire opposite a lander’s direction of travel. They slowed the landers to a gentle touchdown, at which point a sensor in the leg shut the rockets down. This approach seemed sound, but it required a lot of real-world testing to make sure it would work. One particular challenge was that Mars’ thin atmosphere meant that the lander would still be falling faster than the speed of sound when the chute needs to deploy. To test parachutes in a hypersonic, low-atmosphere environment, engineers put plentiful Apollo-era funding to good use. They ran a series of tests that sent a payload into Earth's thin upper atmosphere with a balloon, accelerated it past the speed of sound, then deployed the parachute. It was an expensive test NASA hasn’t repeated since 1968, but it worked and did offer a good stand in for the Martian environment. The whole system worked. Both Vikings landed safely, eventually exceeding their expected lifetime on the surface. NASA ported much of what worked in the Viking missions right over to the Mars Polar Lander

, launched in 1999. Unfortunately, this mission failed when the leg sensor registered a false signal during the descent, causing the retros to shut down early. The Polar lander slammed into the surface at about 50 miles per hour, 100 times faster than it was designed to land. In 2005, NASA's Mars Global Surveyor spacecraft found the crash site; it shows up in black-and-white pictures as nothing more than a dark smudge against a gray landscape. 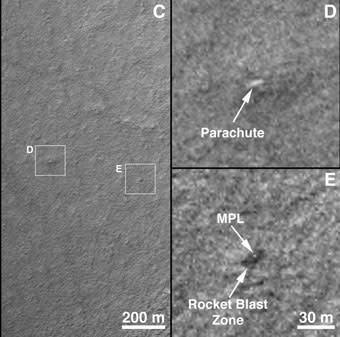 The Mars Polar Lander crash sites. D shows the spacecraft's parachute; E is the lander itself.

, a near-identical copy. The unused hardware was moved to a clean room at contractor Lockheed Martin’s facilities until the mid-2000s when it was brought out and reborn, fittingly, as the Phoenix lander

. The recycled craft used the Viking and Polar landing method, modified to include the lessons learned from the crash. The fixes worked: Phoenix landed safe and sound, working for 155 sols (Martian days) before falling silent. This is the heritage behind InSight’s landing: $1 billion spent developing the Viking mission, $457 million for Phoenix, $120 million for the Polar lander. All the mission details aren’t out yet, but if InSight’s “virtually identical” landing means the same aeroshell, parachute, radar, retros, and landing sensors, it’s unlikely NASA will have to spend significant money extensively testing all these systems. Instead, it can focus on the mission’s science, developing the instruments and making sure they will work in the Martian environment. Recycling technology when landing on Mars works because, luckily for engineers, physics doesn’t change. A parachute that worked on one mission can work on the next, and an aeroshell design that protected one lander will protect another. Of course, this doesn’t guarantee success since anomalies in engineering are common (see: Polar Lander), and it certainly doesn’t mean there will be no pre-launch testing. But it does mean engineers bring better data set to every new mission. From the Recycling is good, even when you’re landing on Mars. Images: NASA/JPL-Caltech; NASA; NASA/JPL/MSSS