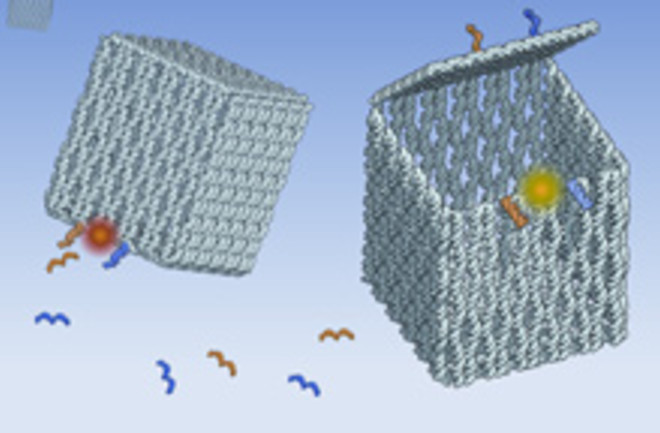 In a masterful work of "DNA origami," researchers have created a nanoscale

DNA "box" which can be opened with DNA "keys". One day, such structures could be filled with drugs, injected into the blood, and then unlocked when and where the drugs are required [New Scientist].

Researchers say the boxes could also be used as minuscule environmental sensors that open or close in response to a stimulus, or as the logic gates of a DNA-based computer. To accomplish this feat, described in a paper in Nature, researchers exploited the fact that complementary DNA bases--the fundamental building blocks of DNA's double helix--attach to each other. To design the box, the researchers

developed a computer program to generate a continuous single-stranded DNA sequence that, along with smaller DNA fragments that act as staples, would self-assemble into the desired shape. The sequence was devised with many complementary regions so that it would automatically fold into six roughly square accordion-like sheets--the sides of the box--based on DNA's natural tendency to pair into double strands. The DNA staples, also driven by the pairing of complementary sequences, stitched the sheets' edges together to form a hollow cube with a hinged lid [Technology Review].

The final product was a box that measured 42 by 36 by 36 nanometers, and had a cavity big enough to hold enzymes or virus particles. To fashion a lid that could be either locked shut or opened with DNA keys, lead researcher Jørgen Kjems and his team

fashioned two tiny DNA latches with sticky ends. Under normal circumstances, the latches adhere to the box, holding it shut. But when the two corresponding DNA keys are added, the latches bind to those instead, allowing the lid to swing open. A pair of dye molecules, one affixed to the box's rim and another to its lid, glow red when close together and green when far apart, providing an easy way to detect whether a box is closed or open [Technology Review].

Others have built two-dimensional patterns using DNA origami, but Kjems's team is the first to boost the technology into three dimensions. While the nanoscale box was intended as a proof of concept, Kjems says it's easy to imagine its potential applications. A simple box like the one Kjems's team built could be used as a drug delivery vehicle, while a more sophisticated system could be used in a bio-computer. Kjems explains:

"[I]n principle you could have up to eight locks, and we're working on locks that respond to different things. This would allow you to make a box that could compute quite complicated logic functions - requiring just the right combination of up to eight signals to open." He adds that by putting the keys to one box inside another, it could be possible to imagine the beginnings of a DNA-based computer [Chemistry World].