Nanogenerator Takes Us One Step Closer to Power-Generating Clothing 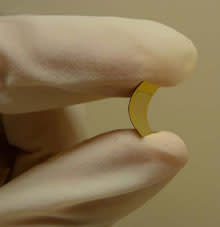 Devices that use the wasted mechanical energy from clothing movements or even a heartbeat seem far out, if not just a bit creepy, but new advances in nanogenerators are making such energy-scavenging electronics possible.

Now researchers at Georgia Tech have made the first nanowire-based generators that can harvest sufficient mechanical energy to power small devices, including light-emitting diodes and a liquid-crystal display. [Technology Review]

The new generators use materials that have a particularly odd property: They collect a charge and drive a current when flexed (this is called piezoelectricity

). The problem in using these materials for energy-harvesting applications has been that the materials that were sufficiently efficient at driving a current were too rigid, and those that were flexible enough weren't very efficient. The new material, described in Nano Letters

, takes the best of both worlds. The team, led by Zhong Lin Wang, sandwiched piezoelectric nanowires between flexible materials. With enough nanowires over a large enough area, the device can power a calculator display.

"By simplifying our design, making it more robust and integrating the contributions from many more nanowires, we have successfully boosted the output of our nanogenerator enough to drive devices," said Wang. [Press release]

The latest device they have created is half and inch square and generates up to three volts when compressed. Wang is hopeful that within three to five years his team will create a device that can generate enough power to run a pacemaker and power small personal electronics, like an iPod.

"We are interested in very small devices that can be used in applications such as health care, environmental monitoring and personal electronics," said Wang. "How to power these devices is a critical issue." [Press release]

Related content: 80beats: A Nano-Wiretap: Scientists Use Nanowires to Spy on a Cell’s Inner Life

80beats: Piezoelectric Promise: Charge a Touch-Screen by Poking It With Your Finger