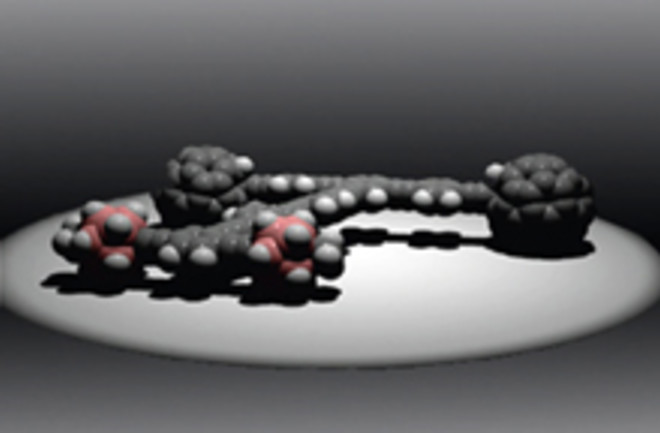 Because there's no point in building a nanoscopic car that couldn't crush other nanoscopic cars in a race, Rice University scientists have rolled out their best and baddest "nanodragster" ever. The car, 1/25,000th the size of a human hair, not only has a freely moving chassis but also can turn when one of its wheels is up in the air. James Tour and his team previously made tiny cars that used carbon-60 molecules called "buckyballs" as wheels, but those wheels could turn on only hot surfaces, about 200 degrees Celsius. No longer. From Futurity.org:

The key to making nanodragsters, Tour says, was putting p-carborane wheels in the front and buckyballs in the back, getting the advantages of both. The front wheels roll easier, while the buckyballs grip the gold roadway well enough to be imaged by Kevin Kelly, an associate professor in the Department of Electrical and Computer Engineering. And the vehicle operates at a much lower temperature than previous nanovehicles.

“The trick to making these nanocars was to attach the smaller wheels first, then deactivate their reactive ends through carbon group attachments that we called ’scythes,’ much like blades on the centers of classical chariot wheels,” Tour says. “Then we could affix the larger C60 wheels to the rear axle.”

No word yet whether any potential nano-races will allow dragsters to gouge each other with those scythes, a la Ben-Hur

. Related Content: Discoblog: Got Too Many Plastic Bags? Recycle Them Into Carbon Nanotubes