My Name Is Topeka, Kansas, but You Can Call Me Google 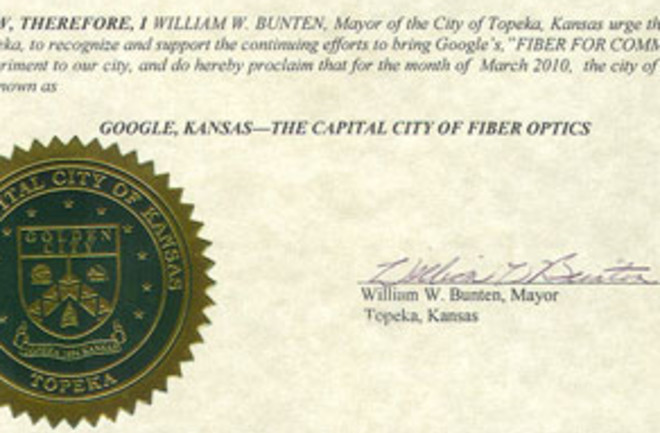 What's the best way to get the attention of Google, so that the wonder-company will choose to rig your town for experimental high-speed internet? Some people think that shameless groveling might do the trick. That must be why Topeka, Kansas changed its name to "Google" for a month; the city hopes it will be chosen as a test site for Google's new fiber-optic network, which would give Topeka residents Internet speeds 100 times faster than what average Americans have. On Monday, the Mayor of Topeka announced that the city shall, henceforth, be referred to as Google, Kansas, through the month of March. Google is accepting entries from communities looking for an Internet upgrade till March 26th, after which it will decide which communities will get a bump up. Topeka's new name is just the beginning of the city going ga-ga for Google. The local baseball team decided to step up to the plate too; the Topeka Golden Giants baseball team announced it has changed its name for March to the Google Golden Giants. Congresswoman Lynn Jenkins (R-Kansas) tweeted "Can't wait to get home to Google this weekend," and The Topeka Capital Journal reported that even the local barbecue stop, Boss Hawg Barbecue, was renaming itself as Boss Hawg Google-Q. However Topeka... sorry, Google, Kansas has stiff competition from other communities like Grand Rapids, Michigan, Duluth, Minnesota, and Columbia, Missouri. Businessweek reports that other cities are planning their own stunts:

The city of Greensboro, N.C., is preparing an "Operation Google" gift package for delivery to Google headquarters and has earmarked $50,000 for promoting a Google broadband effort.

Not just that, the magazine reports that Greensboro plans to launch a channel on Google's own YouTube to pitch why their town needs a net upgrade. The Assistant City Manager Denise Turner told Businessweek: "The city may even temporarily rechristen itself Googlesboro "if Google were willing to come here and talk to us." Google, meanwhile, is loving this. An unnamed Google spokeswoman was quoted as saying that community support is certainly one of the factors the company will consider when it makes its selection. Related Content: 80beats: Italian Court Convicts Google Execs for Hosting Illegal Video 80beats: Google to China: No More Internet Censorship, or We Leave 80beats: Googlefest Can’t Stop, Won’t Stop: 3 New Ways Google Will Take Over Your Life DISCOVER: Big Picture: 5 Reasons Science [Hearts] Google DISCOVER: Google Taught Me How to Cut My Own Hair DISCOVER: How Google Is Making Us SmarterImage: The City of Topeka, Kansas