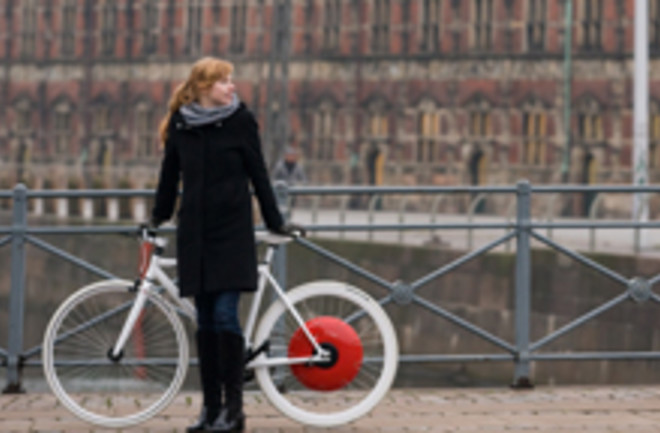 Scientists at MIT's Senseable City Laboratory have designed a bicycle wheel that can give riders a boost when they need it most. Kinetic energy is released when a rider hits the brakes, and the new wheel, called the Copenhagen Wheel, captures that energy for later use.

The new wheel uses a kinetic energy recovery system, the same technology used by hybrid cars, like the Toyota Prius, to harvest otherwise wasted energy when a cyclist brakes or speeds down a hill. With that energy, it charges up a battery inside the wheel’s hub [The New York Times].

The Copenhagen Wheel made its debut today in Copenhagen, one of the most bicycle friendly cities in the world and the site of the current international talks on climate change regulations.The special wheel can be swapped in for any bike's rear wheel, and includes other bells and whistles such as an odometer, a sensor to track air quality, and a GPS. The wheel can even talk to your iPhone though a Bluetooth connection so you can check your speed, direction, distance traveled, monitor traffic, and find your biking buddies. The wheel is expected to retail for between $500 and $1,000. Check out the video below for a preview of the Copenhagen Wheel: Related Content: 80beats: Tesla Unveils a “Mass Market” Electric Car, but It’s a Long Way From the Sales Lot 80beats: A Two-Wheeled, Two-Seat, Tiny Electric People-Mover from G.M. and Segway 80beats: Improved Batteries for Electric Cars Could Recharge in Seconds