Miniature Human Liver Grown in Lab; Seems to Work Like the Real Thing 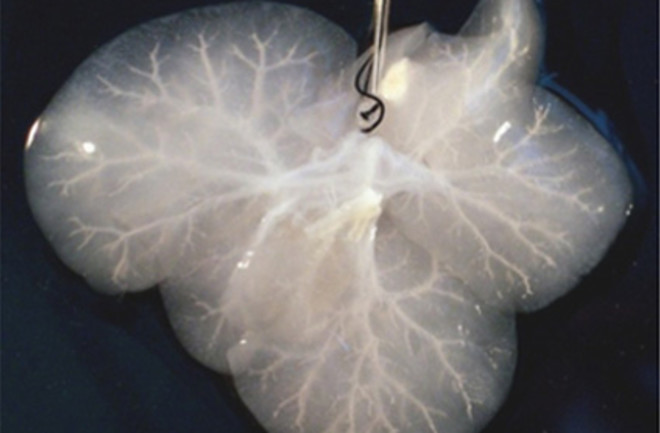 “We are excited about the possibilities this research represents, but must stress that we’re at an early stage and many technical hurdles must be overcome before it could benefit patients,” said Shay Soker, Ph.D., professor of regenerative medicine and project director. “Not only must we learn how to grow billions of liver cells at one time in order to engineer livers large enough for patients, but we must determine whether these organs are safe to use in patients.” [Press release].

The researchers at Wake Forest's Institute for Regenerative Medicine

created livers that weigh about 0.2 ounces each. That's not nearly large enough to keep a human alive (it would need to be about 80 times larger for that), but getting the organ made was a feat in itself. The livers were made using the extracellular scaffolding from an animal liver, after all of the animal's cells had been gently removed from it.

Two types of human cells were attached to the collagen scaffold--the immature liver cells which give rise to specialized liver cells, and endothelial cells which create and line blood vessels. The proto-organ was then placed in a nurturing "bioreactor" which provided it everything it needed to grow. In the lab the livers look successful, but time will tell if they act like normal livers in test animals.

UK researchers welcomed the findings, which are being presented to the American Association for the Study of Liver Diseases. Professor Mark Thursz, from Imperial College London, said the results were "encouraging".

"The report suggests that the authors have overcome one of the major hurdles in creating an artificial liver - to generate functioning human liver cells in a 'natural' liver structure. It is clear that the cells are growing well, but the next step is to show that they are functioning like normal human liver tissue." [BBC News]

Further work on these livers could lead the way to lab-grown transplants, which would lower demand for human liver donors. The researchers think a similar approach can be used to create lab-grown pancreases and kidneys. The experimental liver could also provide a better way to develop pharmaceuticals, letting companies test how new drugs interact with human liver enzymes and cells before they move on to clinical trials. The research will be published in an upcoming issue of the journal Hepatology. Related content: 80beats: How to Build a Working Rat Lung in a Lab

80beats: Doctors Use a Patient’s Own Stem Cells to Build Her a New Windpipe

DISCOVER: How Do Transplant Patients Wind Up with Killer Organs?

Images of 1) the decellularized liver and 2) the scaffold seeded with new cells courtesy of Wake Forest University.