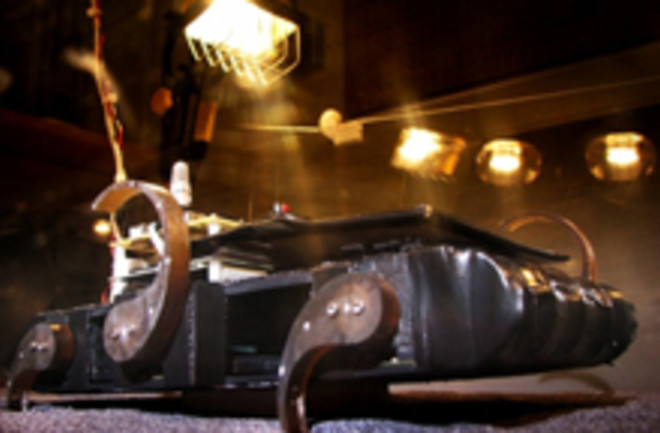 Defying its predecessors, SandBot is the first robot able to traverse sand. Robots normally face the same difficulties as humans when trying to walk across sand, often getting stuck or digging themselves into a rut, and even SandBot had trouble in its first trials. Like a car spinning its tires only to sink deeper, SandBot's legs moved so quickly that the entire robot simply sank [Discovery News]. However, a few tweaks to its speed and the motion of limbs soon had it cruising like a veritable dune buggy. The SandBot model is inspired by the movements of desert animals such as lizards and cockroaches. Instead of moving through sand at a steady rate, the new robot is designed with six limbs, three of which move slowly while in contact with the sand,

. In a year of trials, SandBot eventually traversed a track of "sand" made out of poppy seeds at a speed of about 30 centimeters per second, or at least 15 times faster than the Mars rovers[ScienceNOW Daily News

But successful navigation was a delicate thing. Daniel Goldman, the lead researcher, found that even small changes could reduce SandBot from a confident cruiser to a floundering, sinking mess.

"What was surprising was that it only needed a small change of about half a per cent in either the limb-movement frequency or the packing of the grains to prevent the robot from walking properly," says Goldman [New Scientist].

Goldman believes that sensors should now be built into robots to detect how compact a surface is, so the robot can adjust its limb motion accordingly. In addition to the new six-legged design, the type of feet used for SandBot was also changed: hard feet seem to enable the robot to move more quickly than did a previous, softer set. Scientists don’t yet understand the logic behind this, but they know it works for crabs, and seems to be working well for Sandbot as well. Researchers hope that their SandBot, which was described in the Proceedings of the National Academy of Sciences [subscription required], can point the way towards new robotic explorers for NASA.

The best place to use legged robotic locomotion might not be the sandy beaches of Earth, but rather on the dusty plains of the moon, Mars or other planets [Discovery News].