Mechanical Tail Lets You Rest Tripod-Style, Like a Kangaroo 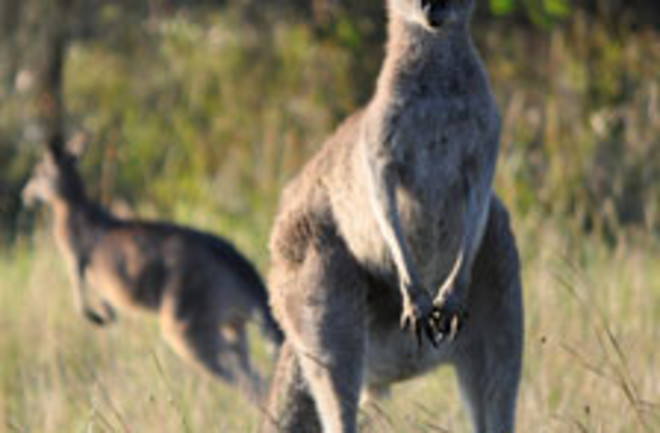 Aching legs. Throbbing feet. Creaky knees. Standing for long periods of time can be a chore. And if there aren't any chairs or clean floors to sit on, it's also inevitable---unless you have a new invention that resembles a retractable robotic kangaroo tail. Meet Emanuele Lopopolo, an Italian inventor who unveiled this portable backrest this device (picture of Lepopolo using the backrest here) at this week's 39th International Exhibition of Inventions of Geneva. As he puts it, "the kangaroo can rest its weight on its tail, so we’ve made the same thing for humans." You just have to buckle yourself into Lopopolo's backrest, extend the telescopic pole that juts out of the back, and then lean back: By reclining at a 60-degree angle, you can give your feet a break from supporting your full body weight. It's intended for chair-less humans who want to take a load off without bending down to sit. This quirky invention is only one of "1,000 completely new inventions" displayed at Geneva's annual invention fair, which, with 765 exhibitors from 45 countries and over 60,000 visitors, is the largest invention fair in the world. It's made possible by the Swiss Government, the Geneva, and the World Intellectual Property Organization (WIPO). Though you may think your life is complete with a retractable kangaroo tail, there are many more useless...er, creative gadgets to catch the eye, such as the mouthwash-dispensing toothbrush, the foldaway tandem bicycle, and the Braille photocopier (this last one actually is useful). One aspiring Edison invested over $70,000 USD (€50,000) on a gadget claimed to be the "fastest shrimp-peeling device ever invented." Another created a "super smart boot" that measures temperature, humidity, location, blood pressure, and---wait for it---radioactive radiation levels. According to Iranian smart-boot inventor Peyman Sarhadi, "It's useful." I think I'll stick with the mechanical kangaroo tail. Related Content: 80beats: Researchers Use Avatar Camera Technology to Try to Understand Kangaroo’s Hop The Loom: Never Mind Those Kangaroo Fossils Not Exactly Rocket Science: The dance of the disembodied gecko tail 80beats: Elephants’ Tail Hairs Tell a Story of Competition on the Savanna