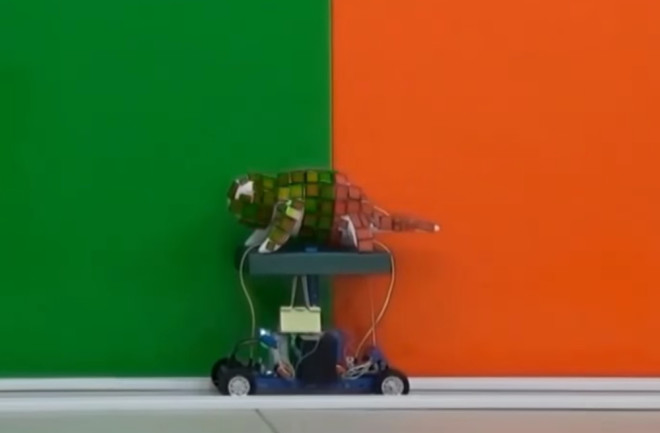 The chameleon changes from red to green as it moves from one background to the next. (Credit: Guoping Wang et al./ACS Nano) When scientists from Wuhan University in China created a novel color-shifting material, they knew exactly how to show it off: attach it to a 3-D printed chameleon. The faux chameleon's body is covered with artificial scales that allow it to blend in with its surroundings. Although the technology is still slow and limited to three primary colors, the real-time demonstration represents yet another step toward the elusive invisibility cloak. In the video below, you can watch colors ripple across the faux chameleon's body as it glides from red to green to blue.

Colors Created at the Nanoscale

The biomimetic chameleon pulls off its feat thanks to nanoparticles that influence electromagnetic radiation — visible light — in response to changes in electrical current. To blend in with its surroundings, the chameleon is outfitted with two sensors, one in each eye, that pick up color variations. When the sensors detect a change, they adjust the current flowing through the panels, causing them to change color accordingly. [embed]https://www.youtube.com/watch?v=Fk60nIB5CAY[/embed] The color-shifting plates adorning the chameleon are composed of thin glass sheets covered with tiny gold domes. The domes are covered with a layer of electrolytic gel containing positively-charged silver ions. Changing the current modulates the thickness and orientation of the silver ions, altering the wavelength of light the material reflects. Researchers published their work recently in the journal ACS Nano. The robotic chameleon shares more than a surface-level similarity to the living, breathing reptiles. Recent research suggests that chameleons use guanine crystals in their skin to alter wavelengths of reflected light and tune in to different colors. Instead of crystals, researchers' color-changing panels use electrical fields and nanoparticles to alter reflected light. If the researchers' color-shifting panels can be paired with flexible electronics, dynamic camouflage suits could be all the more attainable. Flexible electronic paper and video screens are other potential uses for the technology, but more research is needed. The panels are too slow to support video, and the range of colors is still limited.