Maybe We Trust Robots Too Much 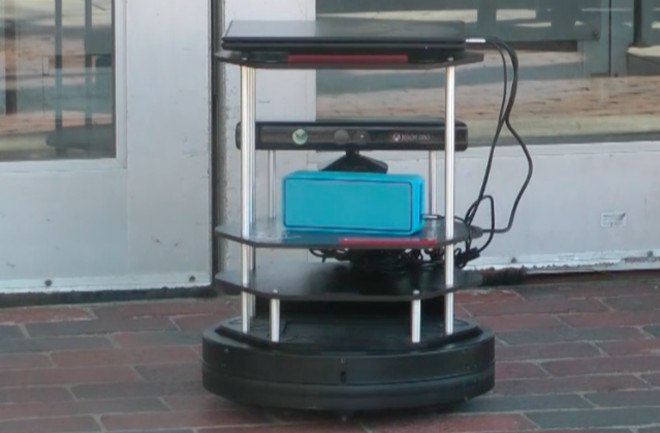 The robot, named Gaia, outside of a dorm on Harvard's campus. (Credit: Serena Booth) Would you let a stranger into your apartment building? Granting an unknown person access to a building was a humorous premise for a Seinfeld episode, but the decision to trust a stranger reveals insights into human psychology and touches on broader issues of trust in society. But what if, instead of a human, a robot knocked at your door? It's a question that Harvard University senior Serena Booth set out to answer with the help of a small, wheeled robot — well, more like a roving nightstand — that she stationed at the entrances to several dorms on campus. And as it turns out, we tend to place more trust in a robot if it looks like it has a job to do.

Will You Let Me In?

Booth controlled the robot remotely, and when she saw an approaching student, she had the robot ask to be let in. When people were alone, they tended not to trust the stack of silicon and plastic at the door — in the small study of 108 people, only 19 percent let the robot in. But when people were in groups, the robot gained entry 71 percent of the time. Only one person actually asked the robot if it had a key card for the building. However, when she armed the robot with a box of cookies and labeled it a delivery bot for a fictional food company, even people walking alone let the robot in 76 percent of the time. [embed]https://www.youtube.com/watch?v=_BRpjlGCN3w[/embed] Booth's study revealed that people seemed to place a fair amount of trust in robots, and even more so when it appeared to have a purpose for being there, despite having no way to read its intentions. Of course, being a delivery robot doesn't change the fact that the robot could have been dangerous — who knows what was actually in the cookie box? Booth conducted her study as part of her senior thesis, and went on to win an annual award, the Hoopes Prize, given to outstanding undergraduates at Harvard.

Robots A Mystery to Us

Even more intriguing, when Booth conducted follow-up surveys of people who were approached by the robot, some of those who let it in still felt threatened by it. Why they complied with its polite query is a mystery, although some of the participants seemed to be won over by the sheer novelty of the question — one even stopped to take a Snapchat video of the delivery robot. Not everyone was so bemused, and several people distanced themselves from the robot. If anything, the lack of a consistent response indicates that we don't really know what to make of robots at our doorstep. While this was a small study, and didn't include a control group of actual humans asking to get in to buildings, it adds a tongue-in-cheek perspective to the notion that we don't know what to make of robots that walk or roll among us.