: In traditional solar cells, sunlight is absorbed by the cell (made from silicon or titanium dioxide), freeing electrons, which travel across the cell to an electron collector, or electrode. A problem with solar cells is that many electrons don't find their way to the electrode; carbon nanotubes can be used as bridges between the loosened electrons and the electrode, but nanotubes tend to bunch up, decreasing the efficiency and causing short circuits. Researchers have now created genetically engineered viruses can be used to keep the nanotubes in place, increasing energy conversion by nearly one-third. “A little biology goes a long way,” research group leader Angela Belcher told MIT News, noting that the entire virus-nanotube bridging layer represents only 0.1% of the finished cell's weight. How the Heck: 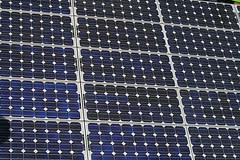 Not So Fast: Kamat says that “the industry is likely to adopt such processes," but this is an early-stage study, so don't expect to pick up virus-enhanced solar cells from Home Depot anytime soon. Reference: Xiangnan Dang et al. "Virus-templated self-assembled single-walled carbon nanotubes for highly efficient electron collection in photovoltaic devices." Nature Nanotechnology. doi:10.1038/nnano.2011.50