Lyft and Uber Might Actually Be Making Traffic Worse

A new study shows that without Uber and Lyft, the highways would be less stuffed and average speeds would be higher. 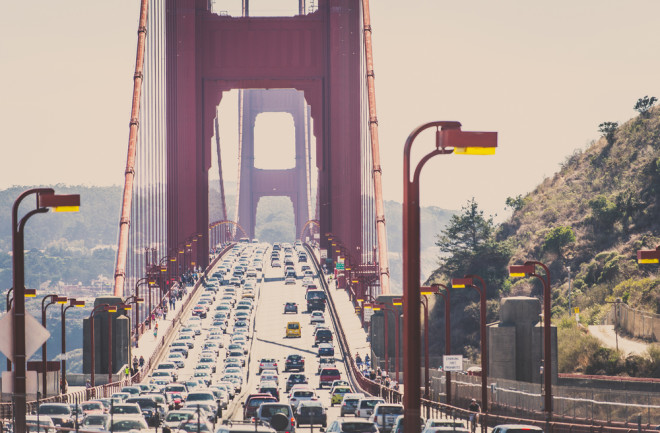 These are consequential days for ride-sharing companies like Uber and Lyft. Drivers in many U.S. cities are going on strike today, protesting low pay, and analysts expect Uber will likely earn billions when it goes public on Friday. (The two events are not unrelated.)

But amidst the economic discussions, at least we can all agree that it’s good news in terms of traffic, right? The more people rely on professional drivers to get around, the fewer individual cars will be clogging up the streets. It makes sense — but is it actually true?

The team of authors from the University of Kentucky and the San Francisco County Transportation Authority looked specifically at traffic patterns in San Francisco from 2010 to 2016, an interval spanning the rise of ride-sharing apps, or transportation network companies (TNCs), like Uber and Lyft.

“We enter this debate to address the question,” they write, “do TNCs decrease or increase traffic congestion?”

While previous studies had tried to answer it, the authors say a lack of data has led to mixed results. So, this time they made sure to get tons of it: TNC volumes, pickups and drop-offs all over San Francisco, sorted by time of day, and scraped from the application programming interfaces of “the two largest TNCs” — presumably, Uber and Lyft. They also produced a model, based on known roadway conditions, demographic analyses and other data, that simulates what 2016 traffic would have looked like without ride sharing apps.

The results don’t look great for the companies. “Observed changes in travel time are worse than the background changes would predict,” the authors write. “Travel times get worse on roads with more TNC activity than on roads with less TNC activity after controlling for background traffic changes. This result supports the hypothesis that TNCs increase congestion, at least in San Francisco.”

The numbers are stark. One of the biggest differences was in travel times, which the team measured in terms of the amount of delay caused by traffic congestion, as opposed to free-flowing, smooth sailing traffic. The researchers say that ride-sharing services made delays 62 percent worse.

Meanwhile, in the researcher's simulated model of how much worse things would've gotten anyway without the ride-sharing, travel delays went up, but not nearly as much: 22 percent. The average speeds of cars on the roads also went down over time, decreasing 13 percent in real life, but only four percent in the model.

So in a world without Uber and Lyft, the highways would be less stuffed and average speeds would be higher. And travel time became less reliable overall, too. That pushed commuters to give themselves a buffer to make sure they’d arrive somewhere on time. Thanks to ride sharing services, commuters are now giving themselves about 15 percent more time to get somewhere. The researchers say the natural increase without Uber and Lyft would've seen people giving themselves about 6 percent more travel time.

The authors even listed some reasons why ride-sharing might be making traffic worse. Most TNC trips actually add vehicles to the road, they found, as riders take the more convenient option instead of mass transit, walking, cycling or simply not going. And pickup/drop-offs proved distinctly disruptive to traffic flow, especially in the highest-density streets that need the most help alleviating congestion to begin with.

The authors concede that more work needs to be done, including studying these trends in other cities and non-urban areas to get a better overall picture of their effect. But, with TNCs making up 15 percent of all intra-San Francisco vehicle trips and ridership doubling in New York from 2014 to 2016, these ride-sharing trends show no signs of slowing down — unlike the congestion they create. The more we learn about how these companies actually affect traffic, the better we can incorporate them into our future transportation systems.