Instead of taking a layered approach, system lifts objects from a pool of resin that hardens in the presence of UV light. 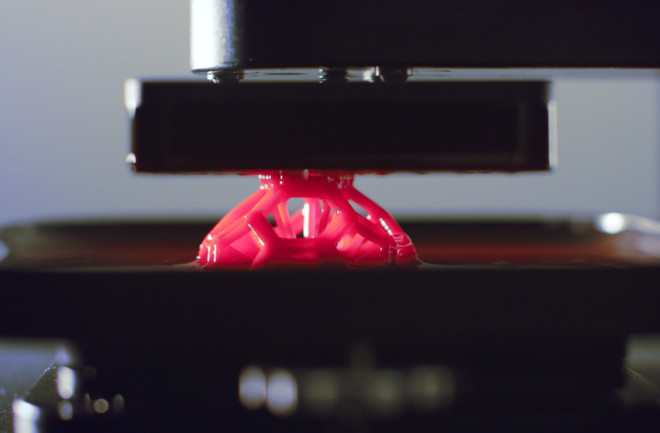 The arm of the CLIP printer works in tandem with a light projection system. | Courtesy Carbon3D

A new 3-D printer makes objects appear to grow from primordial goo, all in a matter of minutes.

The Continuous Liquid Interface Production technology (CLIP), reported in March in Science, features a pool of specialized resin that hardens when exposed to light but remains liquefied when exposed to oxygen. A projection system flashes ultraviolet light patterns through an oxygen-permeable window beneath the resin while a mechanical arm pulls the object upward as it’s being created. Since the light and arm work in tandem, shapes and lattices can be printed continuously rather than layer by layer, like — dare we say — “old-fashioned” 3-D printers.

The CLIP is fast: An intricate, 51-millimeter structure emerges from the resin in six and a half minutes. The same job with a traditional 3-D printer would take three hours.

A new type of 3-D printer uses a pool of resin that rests between a light projector and building platform. The resin is liquefied the dead zone — as long as it's in contact with oxygen. It will harden in light, appearing to rise from the pool. | Courtesy Carbon3D
1 free article left
Want More? Get unlimited access for as low as $1.99/month
Subscribe