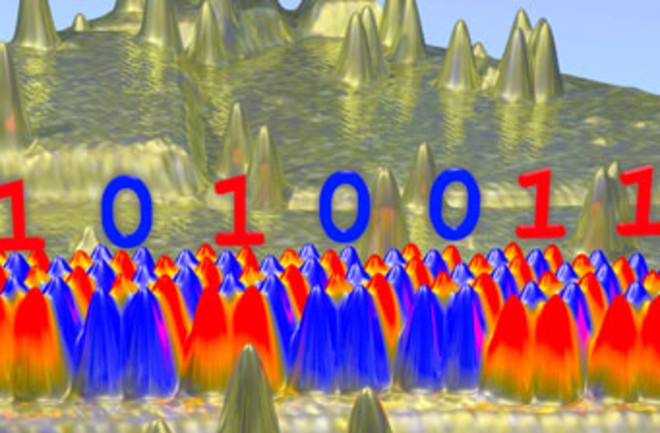 Within the decade you may be storing your media library, health and financial history, and every bit of data relevant to your life on a device smaller than a staple. When it happens, you can thank a handful of scientists racing to cram ever more data storage bits into smaller spaces. The frontrunner is Andreas Heinrich, a nanotechnologist at IBM’s Almaden Research Center. This winter he coaxed a cluster of 12 iron atoms to store one bit of data, consisting of either a 1 or a 0. Today’s hard drives require about a million atoms to store one bit. Heinrich did it by painstakingly using a microscope fitted with a tool to move the atoms into a formation. The arrangement induced each atom to take on a magnetic charge opposite that of its neighbor. This checkerboard configuration allowed far tighter packing than in current hard drives, where atoms of the same charge repel each other.

Other contenders include German physicist Roland Wiesendanger, who is applying a similar technique to cobalt, and British chemist Stephen Liddle, who is testing a molecule he created from two uranium atoms. “When everything is communicating—from your refrigerator to your car to your home heating—you’ll need ways to store huge amounts of data,” says Ian Steff, vice president of global policy at the Semiconductor Industry Association. “That will happen at the atomic level.”