Will the next generation of computers, phones, and even energy storage be built on a form of carbon? 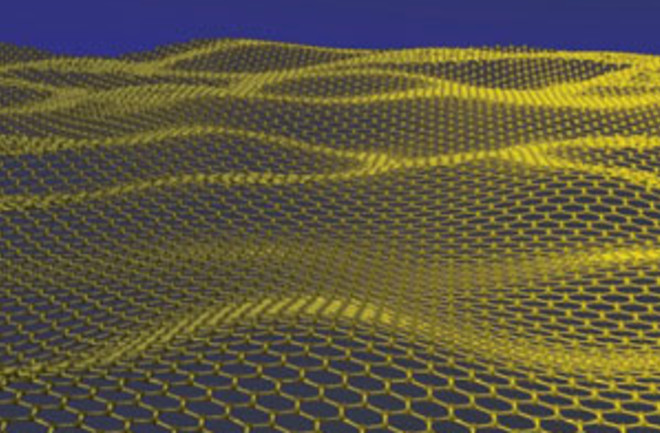 Graphene, the hottest new material in electronics, is remarkably simple: a flat sheet of pure carbon rings—just one atom thick—that resembles chicken wire. But this unassuming structure has caught the attention of researchers at laboratories in the United Kingdom, Texas, and Georgia and even at IBM. They are studying graphene for a wide range of applications, from computer chips to communication devices to touch screens. It might even put a fresh spark into the electrical grid.

Consisting of a single layer of graphite, graphene is an allotrope of carbon that has been studied for decades. It did not seem technologically important, however, until scientists began looking at potential replacements for silicon in electronics. In 2004 physicists at the University of Manchester in England demonstrated a simple way to produce graphene—peeling off layers of graphite, a method known as mechanical exfoliation—spurring an explosion of research.

Graphene has several very appealing traits. Electrons meet much less resistance from graphene than they do from silicon, traveling through it more than 100 times as easily. And because graphene is essentially a two-dimensional material, building smaller devices with it and controlling the flow of electricity within them are easier than with three-dimensional alternatives like silicon transistors.

The first commercial use for graphene may be as an electrical coating for LCD screens, solar cells, and touch screens. Thin, transparent, extremely conductive, and strong, it seems ideal for the job.

Researchers looking to build the next generation of computer chips have more ambitious plans for graphene. Today’s chips are made from silicon, but many engineers think we are approaching the limit of how small the transistors in these chips can be built. Ken Shepard, an electrical engineer at Columbia University, says it will eventually become too complex and expensive to make ever-tinier silicon chips.

Silicon chip speeds have hit a plateau in the gigahertz range, says Walt de Heer, a physicist at Georgia Tech. He estimates that graphene can operate at terahertz frequencies—trillions of operations per second. He also says its reduced resistivity will help avoid overheating.

Physicist Kostya Novoselov from the University of Manchester agrees that graphene’s properties give it enormous potential. “The carbon bonds are so stable that small transistors of even only a few atoms can sustain high currents,” Novoselov says. “It’s an amazing material.” Graphene’s electrical properties are also modifiable, he adds. Currently, a typical chip is a triple-decker sandwich of conducting, insulating, and semiconducting layers, each made of different materials. Theoretically, graphene can be tweaked to take on all three roles. In fact, Novoselov’s team recently developed graphane, a form of graphene that interacts with hydrogen and functions as an insulator.

The biggest challenge in exploiting graphene’s jack-of-all-trades flexibility in computing applications is getting it to perform as a true semiconductor. While it can be considered a semiconductor like silicon, graphene lacks one crucial property—the ability to act as a switch. Without this, a chip will draw electricity continuously, unable to turn off. But engineers are making headway. In February researchers at the University of Illinois showed that nanoribbons of graphene could be cut in such a way that they could be turned on and off.

Some engineers think the switching problem is so intractable, though, that graphene chips for digital applications will never be a reality. “You will not see Intel making a microprocessor with graphene,” Shepard says. The most likely applications for graphene, he expects, will be in analog systems, such as radar, satellite communications, and imaging devices.

Shepard is part of a team of scientists from Columbia and IBM working under a $4 million grant from the Defense Advanced Research Projects Agency (DARPA) to develop field-effect transistors made of graphene, which is particularly good at amplifying weak signals at high frequencies. He predicts the first graphene device from DARPA will be for specialized government communications. Yu-Ming Lin, who researches nanoscale devices at IBM, envisions graphene transistors amplifying signals between cell towers and eventually inside cell phones.

Even in analog devices, there are still hurdles to overcome—most notably the difficulty of creating large batches of graphene. The simplest method is to peel off layers from three-dimensional graphite using a piece of Scotch tape. But this approach yields small, imperfect flakes that are useless for many practical applications. Another process, pioneered by researchers at Georgia Tech, involves growing graphene on silicon-carbide crystals. This produces a purer form, but the technique needs to be refined before graphene wafers can be churned out in commercial quantities.

If production can be improved, graphene may even revolutionize the energy industry. Solar and wind energy currently suffer from inadequate storage methods. Some researchers think that graphene ultracapacitors could be the answer.

Rod Ruoff, a physical chemist at the University of Texas at Austin and cofounder of a spin-off company, Graphene Energy, says even the firm’s first experimental model rivaled the best available ultracapacitors in energy storage. Ruoff believes that graphene ultracapacitors could eventually have twice the storage of those available today. He expects to have useful prototypes in a couple of years. “We want to have an impact in the grid,” he says.

BuzzWordsAllotrope: One of multiple forms of an element that have different properties. Diamond and graphite are both carbon allotropes.Resistivity: A measure of a material’s ability to transmit electrical current. Good conductors have low resistivity.Semiconductor: A material whose electrical properties fall in an intermediate range between those of conductors and insulators.Ultracapacitor: An energy storage device that works by separating electric charge rather than by storing it chemically (as batteries do).