Laser-Powered Robot Climbs to Victory in the Space-Elevator Contest 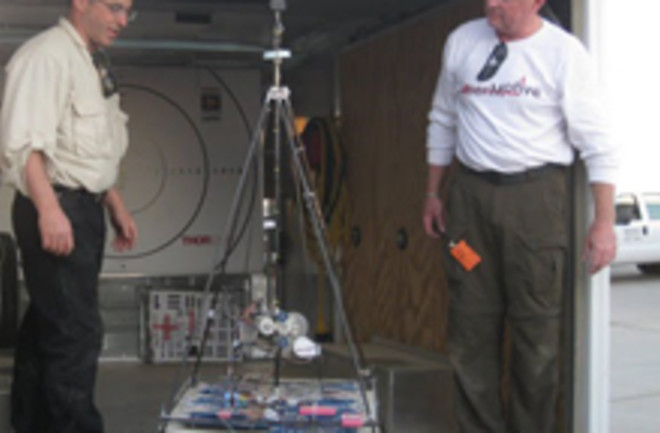 A laser-powered robot took a climb up a cable in the Mohave Desert in Wednesday, and pushed ahead the sci-fi inspired notion of a space elevator capable of lifting astronauts, cargo, and even tourists up into orbit. The robot, built by LaserMotive of Seattle, whizzed up 2,953 feet (nearly 1 kilometer) in about four minutes, which qualifies the team for at least $900,000 of the $2 million in prizes offered in the NASA-backed Space Elevator Games.

Theorized in the 1960s and then popularized by Arthur C. Clarke's 1979 novel "The Fountains of Paradise," space elevators are envisioned as a way to gain access to space without the risk and expense of rockets. Instead, electrically powered vehicles would run up and down a cable anchored to a ground structure and extending thousands of miles up to a mass in geosynchronous orbit — the kind of orbit communications satellites are placed in to stay over a fixed spot on the Earth [AP].

The LaserMotive vehicle that climbed up the cable (held by a hovering helicopter) was powered by a system that resembles an upside-down solar power mechanism. Laser beams on the ground were fired up at the ascending craft and hit its photovoltaic cells--like those used in solar panels--in a process known as "power beaming." LaserMotive will have a chance to improve its vehicle's speed at another trial today, and other teams will also be vying for prizes. Related Content: 80beats: Japanese Group Pushes for $9 Billion, 22,000-Mile Space Elevator DISCOVER: Going Up follows U.S. engineers on the space elevator quest Image: Space Elevator Games. The LaserMotive vehicle gets weighed in.