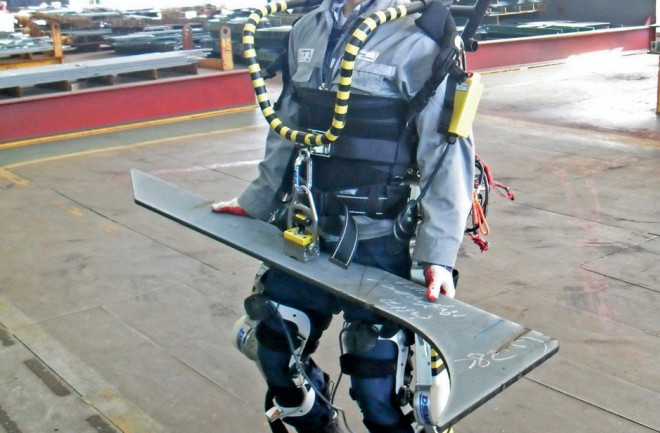 Robotic exoskeletons allow shipyard workers to lift heavy loads with ease. (Courtesy: Daewoo) At Daewoo’s South Korean shipyard, lifting and moving massive slabs of metal as if they’re made of foam could soon be a basic job requirement for workers. Of course, they'll have some help: robotic exoskeletons, which made their debut last year at the company’s manufacturing facility, are on the rise. After successfully testing the exoskeletons last year, the shipbuilding giant hopes to soon outfit some of their employees with the technology, giving them the superhuman strength to take production to new heights, New Scientist reports. The prototypes tested allowed workers to pick up 65-pound objects and manipulate them with ease, but Daewoo plans to increase the exoskeletons’ carrying capacity to roughly 220 pounds with design improvements.

The exoskeletons themselves weigh in at 60 pounds, but workers don’t feel the load because an aluminum alloy and steel frame supports its own weight. Workers simply lock their boots into the footpads of the suit, and fasten straps from the thighs to the chest. Hydraulic joints and battery-powered motors give the workers Iron Man-like strength for lifting, but also allow them to walk normally. In addition to raw lifting ability, workers can also handle heavy objects precisely, since they feel much lighter.

The Age of Exoskeletons

After years of research into robotic exoskeletons, it seems 2014 is shaping up to be the year the technology enters the “real world.” In July, the U.S. Food and Drug Administration approved the first robotic exoskeleton for paralyzed individuals. During the opening ceremony of the 2014 FIFA World Cup, a teenage Brazilian paraplegic delivered the opening kick with a mind-controlled exoskeleton. According to a 2014 Wintergreen Research report, the market for rehabilitative robotics — which includes exoskeletons — is expected to grow from its current $43.8 million to $1.8 billion by 2020.