Knight Rider: Because Hafnium is better than none-ium 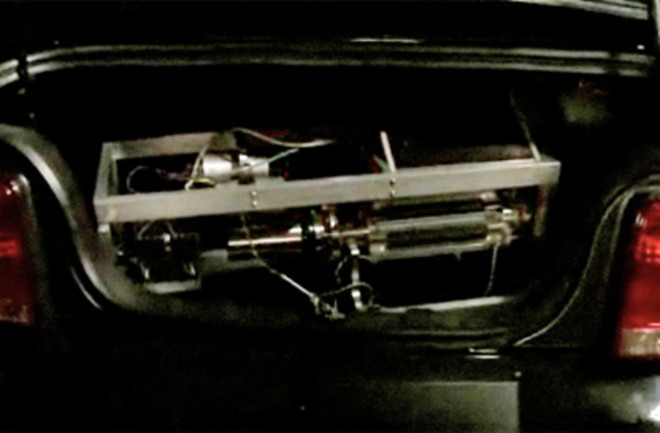 I know you all caught the "stay tuned" clips at the end ofKnight Rider, right? It looks like we're going to get our big fight, our KARR v. KITT battle at last! I can hardly wait, but as long as I have to wait, let's talk about the cliff hanger from last night's episode. We left our heroes driving straight north at 100 miles per hour carrying a hafnium bomb in the trunk. Dip below 100 miles per hour and BOOM! Keanu-er, Michael and KITT explode, destroying everything in a 10-mile radius. Now hang on, a hafnium bomb? Hafnium actually exists (which is more than I can say for some elements), but can it actually blow up like that? Well, some scientists believe it can. In the real world, hafnium is closely related to zirconium, and it has many of the same properties. The structure of the hafnium solid is especially effective at storing energy. That makes it useful in control rods in a nuclear reactors, and also as a way to store energy as a kind of atomic battery. To get any kind of explosion, start with the hafnium isomer 178m2. An isomer is an atomic isotope already charged with energy. Typically that energy will dissipate in its own random radiation, but in the case of hafnium, with it's high storage capacity, a few (a very few) physicists believe it could be triggered to release all its energy in a fairly short space of time in a kind of explosion. I say "kind of" because the energy released would be in the form of gamma rays. As the highest energy form of electromagnetic radiation, gamma rays usually pass right through most solid objects. But when released in such high doses, they could, as Sharon Weinberger put it in the Wasington Post, "they could act like ray bombs in low-budget films, vaporizing living tissue and heating materials until they explode." Nasty stuff. (Weinberger, who has written for DISCOVER, is a hafnium bomb sceptic and has since written a lively account of the controversy in her book Imaginary Weapons) So storing energy in a hafnium isomer is one thing. Getting it all out rapidly enough to make an explosion is another. Carl Collins, a physicist at the University of Texas, claimed in 2004 that he got a lot of energy out just by shooting an X-ray from a dentist X-ray machine, but his work has not been duplicated and is considered dubious by many in the scientific community. So the science is pretty questionable: Could our villain actually blow up hafnium with an X-ray machine? Well, phycists in the real world haven't achieved it, but this kind of gray area is, after all, the whole point of SciFi. Maybe with a little elbow grease and a lot of evil-genius know-how, the hafnium bomb could be made to work. For more on the U.S. Military's research into the hafnium bomb, readers might want to look at this pair of excellent posts over on Wired's Danger Room blog. Posting update: A surfeit of latkes and holiday galavanting caused me to get behind on Knight Rider and Eleventh Hour. I plan to catch up, so stay tuned.