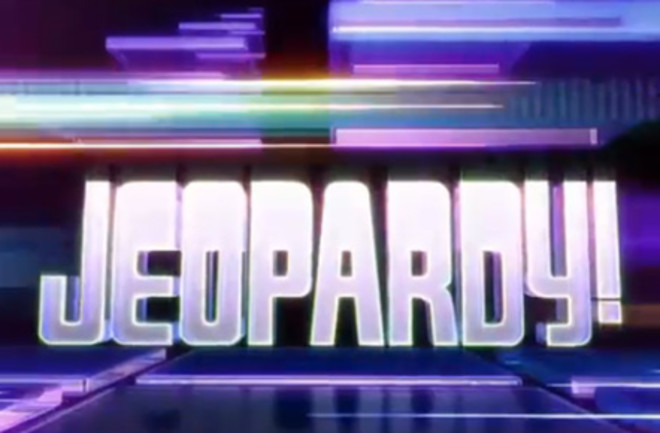 Live, from IBM's Thomas J. Watson Research Center: This is Jeopardy! Today, IBM rolled out its Jeopardy-playing computer, a whiz machine named Watson that was four years in the works. In today's demonstration match for the media Watson played against Brad Rutter and Ken Jennings, the two great (human) Jeopardy champions who will provide opposition for Watson in a two-day exhibition match. That man versus machine faceoff will air in February, and carries a prize of a million dollars. Bad news, humans: In today's exhibition of about 15 questions, Watson tallied $4,400, compared to $3,400 for Jennings and $1,200 Rutter.

On stage, Watson was represented by a screen displaying its avatar (pictured) behind a podium, where a human player's torso would be. Its avatar is a mobile graphic of the Earth with aurora-like lines swirling around it. When Watson was confident in its answer those swirls were shaded green; when it wasn't they turned an orange hue. The questions were fed in plain text to Watson, but it had to wait the same amount of time to ring in as the human players did. To make the game fair, it also had to trigger a mechanical signaling button. Watson spoke in a stilted computerized voice--and was almost never wrong. The machine started off on a roll in the category "Chicks Dig Me," about women and archaeology. Jehrico. Agatha Christie. Mary Leakey. Crete. Watson fired off the answers so quickly it looked like it might blow its puny human competition off the stage. Fortunately for our species pride, Ken and Brad recovered with some right answers of their own. After the demo, IBM trotted out Alex Trebek--to the crowd's delight--allowing him to answer questions about the project alongside Jeopardy producer Harry Friedman and players Rutter and Jennings. Several IBM masterminds also weighed in, including David Ferrucci, who has led IBM's attempts to make a machine that can play Jeopardy. When one thinks of IBM and games, one thinks of Deep Blue and its legendary chess matches against grand master Gary Kasparov in the 1990s. But Ferrucci noted that "Jeopardy is a very different challenge from chess." Chess is all cold logic, math, and strategy. Perfect for a computer. Jeopardy requires not only deep knowledge across all fields of human endeavor, but also an ability to parse and understand a question... and sort though the sparkling wordplay of Jeopardy clues. The first part is easy for a computer. Ferrucci said his team fed dictionaries, thesauruses, plays scripts, and pretty much anything they could get their hands on into Watson's databases (though it isn't hooked up to the Internet, and it doesn't understand foreign languages yet). The second part--getting a machine to understand conversational speech--is one of the grand challenges of artificial intelligence. While computer scientists spend their careers trying to push this field an inch forward, Jennings notes that even his 3-year-old can parse an English sentence. Watson has already come a long way. Its setup is called "Massively Parallel Probabilistic Evidence-Based Architecture," and it runs on 2,800 Power7 processing cores. If all that computer and interpreting power presents an answer that satisfies Watson's confidence interval, it rings in. When IBM began the project in 2007, it tended to spit out nonsensical or embarrassing answers--when asked Ricky Ricardo's signature song, for example, it would answer "song." But over the last four years, as Watson's algorithms have gotten better and better at blazing through its vast collections of data and figuring out how places, people, and other information is related in a written text (and what that means), its success rate has crept up toward that of the grand champions of Jeopardy: It buzzes in about half the time, and answers 85 to 95 percent of those questions correctly. Tomorrow Jeopardy will tape the real encounter between Jennings, Rutter, and Watson. Are the human competitors nervous, especially since they haven't actually played the game in five years? "Not now," Rutter says, "but when Watson's progeny come back to kill me from the future." Jennings insists that he's feeling cool. And setting aside his own pride for a moment, Jennings says it's worth noting that humans built the thing. Whoever wins, we win. Ferrucci is keeping his cards close to the vest before the big match, refusing to reveal too much about his prize quiz-fighter, like which categories might be his weakest, or his strategy in computing how much to wager on Daily Doubles or Final Jeopardy. As for Watson's state of mind, Ferrucci puts it this way: "Watson does not have emotion, but Waston knows that humans have emotion." And Alex Trebek is just having a good time. When asked about his mid-game interview with Watson, the host noted that Watson can't see or hear, so he will not be asking it any questions out loud. "I will probably make fun at his expense," he says. Related Content: 80beats: Your Clue Is: “This Robot Will Attempt to Crush Humans in ‘Jeopardy!’” 80beats: Watson, an IBM Supercomputer, Could Be the Next “Jeopardy!” Champion Discoblog: First Chess, Now Poker? Computer Programmers Try To Crush Human Competitors DISCOVER: Deeper Blue?