Japan's "Solar Yacht" Is Ready to Ride Sunbeams Through Space 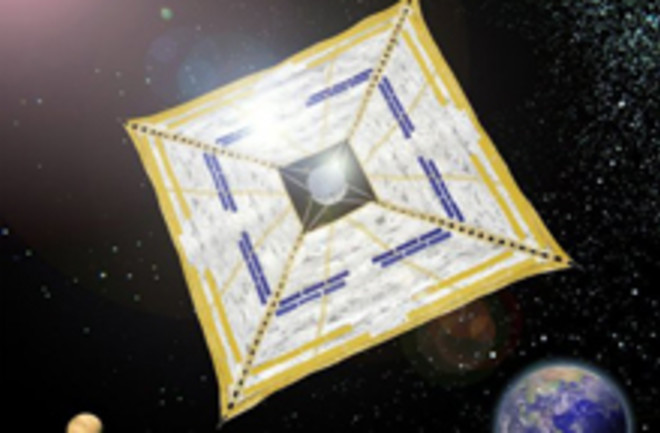 On May 18, the Japan Aerospace Exploration Agency (JAXA) says, it will launch into space a "solar yacht" called Ikaros—the Interplanetary Kite-craft Accelerated by Radiation of the Sun (named, of course, in honor of Icarus in Greek mythology).

. Actually, the solar sail is a dual-purpose system, taking advantage of both the pressure and the energy of sunlight. The sail, which is less than the thickness of a human hair and 66 feet in diagonal distance, will catch the actual force of sunlight for propulsion as a sailboat's sail catches the wind. But the solar sail is also covered in thin-film solar cells to generate electricity. And if you can make electricity, you can use it to ionize gas and emit it at high pressure, which is the propulsion systems most satellites use.

Potential velocity using a solar sailor has been theorized to be extremely high. “Eventually you’ll have these missions lasting many years, reaching speeds approaching 100,000 mph, getting out of the solar system in five years instead of 25 years,” said Louis D. Frieman, the Executive Director of the Planetary Society [Clean Technica]

. The society has toyed around with its own solar sail. For now, though, JAXA has a six-month test mission planned for Ikaros. If it works, they want to send a solar sail-powered mission to Jupiter and then the Trojan asteroids. That voyage would employ both the force of the sun and ion propulsion, and the Japanese are brimming with confidence:

“Unlike the mythical Icarus, this Ikaros will not crash,” Yuichi Tsuda, an assistant professor at JAXA, said today [BusinessWeek]

. Related Content: 80beats: Japan's Damaged Asteroid Probe Could Limp Back to Earth in June 80beats: Spacecraft That Sails on Sunshine Aims For Lift-Off in 2010, on the Planetary Society's own attempts at a solar sail. DISCOVER: Japan Stakes Its Claim in Space DISCOVER: One Giant Step for a Small, Crowded Country, on Japan’s moon aspirations DISCOVER: Japan Sets Sail in SpaceImage: JAXA

More From Discover
Environment
How Long Will Fukushima Stay Radioactive?
Planet Earth
City Squirrels Might Be Getting Bolder — Or Maybe You're the One Who's Changed
Environment
Japan Just Had Its Earliest Peak Bloom of Cherry Blossoms in 1,200 Years. Is Climate Change to Blame?
The Sciences
Check Out Drone Footage of Kirishima's Largest Eruption Since 2011
The Sciences
Unexpected Eruption at Japan's Kusatsu Triggers Avalanche
The Sciences
Kirishima in Japan Erupts for the First Time Since 2011
Recommendations From Our Store
My Science ShopDiscover STEM Kits
My Science ShopDiscover 2022 Calendar
My Science ShopStrange Science
My Science ShopElements Flashcards
Shop Now
Stay Curious
Join
Our List