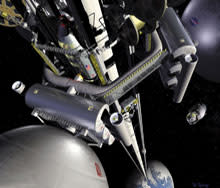 At an international conference in November, a group of ambitious engineers and would-be astronauts will draw up a proposal and a timeline for building the world's first space elevator, which would give humans access to orbit via 22,000-mile-long cables. The Japan Space Elevator Association [Web site in Japanese] estimates the project's cost at $9 billion, but according to the association's officials, the elevator would be a bargain at that price.

A space elevator could carry people, huge solar-powered generators or even casks of radioactive waste. The point is that breaking free of Earth's gravity will no longer require so much energy — perhaps 100 times less than launching the space shuttle. “Just like travelling abroad, anyone will be able to ride the elevator into space,” Shuichi Ono, chairman of the Japan Space Elevator Association, said [The Times].

Proponents of the space elevator concept pin their hopes on future developments in nanotechnology: They hope that extraordinarily strong carbon nanotubes will be invented that can be knit together to produce the elevator cables.

Carbon nanotube technology has advanced so rapidly that a material capable of withstanding the amazing forces in the space elevator cable is almost within reach: according to the chairman of the Japan Space Elevator Association it'd only need to be four times stronger than the current strongest nanotube rope [Gizmodo].

The elevator's ascent could be powered by similar technology to that which drives Japan's high-speed bullet trains, says association director Yoshio Aoki:

"Carbon nanotubes are good conductors of electricity, so we are thinking of having a second cable to provide power all along the route" [Telegraph].

At the end of the ride, passengers and cargo would arrive at a satellite station in geosynchronous orbit (remaining over the same spot on Earth), where space tourists could play zero-gravity games and scientists could conduct experiments. Some American engineers are also fascinated by the space elevator prospect; read all about their hopes and dreams in the DISCOVER feature, "Going Up." Image: NASA