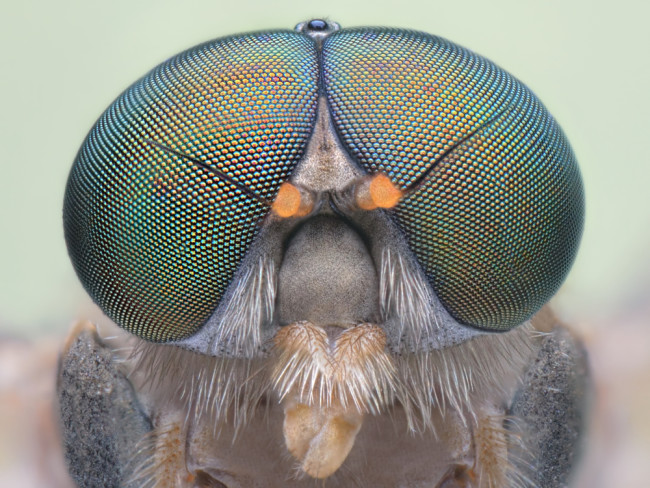 Buzzing may not be the only thing drones have in common with insects. Tiny drones of the future might “see” their world with tiny, artificial sensors inspired by flying insects’ compound eyes. The experimental sensors are small and light enough to fit on the tiniest drones, which could give them the ability to sense and avoid collisions in cluttered spaces.

Like most other gadgets, scientists are looking to make drones smaller and smaller for a number of reasons. For one, a tiny drone is far stealthier and can conduct surveillance in secret. Mini drones could also be deployed at the scene of a disaster, say, a collapsed building, and navigate through previously inaccessible nooks and crannies in search of survivors. Here’s the problem: Drones traditionally see with onboard cameras that are too bulky and heavy for mini-drones that weigh less than 50 milligrams. So researchers are testing photosensitive eyes that weigh less than 2 milligrams and are about the size of a deer tick. The “eyes” work similarly to those of flying insects.

Insect eyes generate a low resolution picture, but thanks to their multiple lenses they are incredibly sensitive to changes in the way light is reflected as the insect moves, or from moving objects in its environment. This is how insects avoid collisions, like being smashed into a pulp with the palm of your hand. Researchers’ artificial eye is constructed with three photodetectors arranged in a triangular pattern, which basically mimics the sensing capabilities of insects' sub-eyes. A lens is placed over the top of the triad. Each photodetector independently measures changes in light, and an algorithm stitches together the three readings in order to gauge speed and motion direction. The algorithms have been loaded onto chips that tell a craft where obstacles are, their distance from the craft and the time until a collision. Researchers published their work on artificial eyes last month in the journal Royal Society Interface. Eventually, researchers want to combine multiple artificial eyes on a single drone so it can “see all around” and avoid collisions, stabilize its flight path, land and take off. With the right vision and programming, tiny drones with insect-inspired eyes could someday operate autonomously, avoiding trouble while performing a specific job. It’s certainly cool to see insect-inspired technology in drones, but let’s leave the stinging and biting to the biological buzzers.