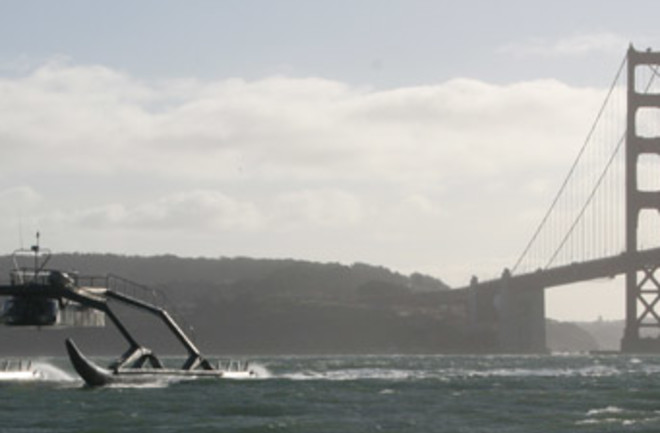 When Ugo Conti piled his family into a sailboat to take a three-year trip around the world, the main problem wasn't his lack of sailing experience—it was his tendency to get sick at sea. So, like a lactose-intolerant ice cream lover, he was eager to find a solution to his problems—and confident that he could be the one to make it happen. After a few years spent MacGyvering around in his garage, he developed wave adaptive modular vessels (WAM-V) technology—boats that are flexible enough to conform to the water's surface, skimming along the surface instead of busting through waves. In addition to having the appearance of a giant robotic water bug, the Proteus, as the boat is named, also has some impressive un-boatlike innovations. The boat sits on two 100-foot inflatable pontoon holds, each with 6 internal chambers. These are spread 50 ft apart, creating a stable platform for the bridge and cabin, which are suspended by legs on titanium springs. These springs absorb the up-and-down motion of the waves—distinguishing the boat from catamarans, which rock and roll at the water's whim. Hanging off the back of the pontoons are independent engine pods with 355-horsepower diesel engines, which always remain in the water (as opposed to catamaran engines, which can leave the water when the boat rocks). Differential control of these engines allows the craft to turn and spin around. Another interesting innovation is that the easily exchangeable cabin—use it as a rescue boat one day, gather marine specimens for a lab experiment the next. Image: Toby Thiermann © 2007 Marine Advanced Research