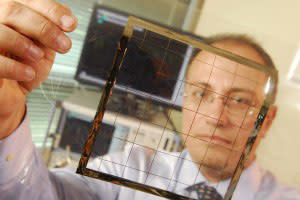 Georgia Tech researcher Manos Tentzeris holding up one of his inkjet-printed antennas.

What’s the News: With all of the electronics cluttering our daily lives, the air is abuzz with ambient electromagnetic energy

from sources like cell phone networks, radio and television transmitters, and satellite communications systems. Now, researchers at the Georgia Institute of Technology have devised a simple, cheap way to harness that wasted energy: capturing it with inkjet-printed antennas and storing it in batteries

The Future Holds: The researchers point to an array of possible applications for their device. Perhaps the most obvious use is powering various detectors of anything from explosives in airports to chemicals indicating spoilage in canned foods to signs of structural stress in buildings and homes. The team also thinks that the energy-scavenging device could augment solar-powered batteries, or be used as a backup power source that allows electronics to maintain critical functions when their normal power source, be it the sun or a battery, drops off. (via Popular Science