In His Own Words: Michael Hawley

I started playing the piano in kindergarten. I had four lessons—each more miserable than the last. I was playing by ear and by heart, which is the natural way to start and learn. But my teacher, an old English lady, insisted that I look at the music. She used to close the lid right over my fingers. Finally she said, "Why don't you bring something that you like to play? I'd like your mother to watch." Mom came in the next time, and I played the Marine Corps Hymn—with chords and stuff, which is pretty good for a 4-year-old. The teacher threw up her hands and said, "See, I can't do anything for him. He's playing a completely different key than what's on the page! He's not even reading the music!" She thought I was a hopeless case and advised my parents to save their money. In an odd way, I was lucky to get pushed away from the piano as a kid, because there's no shortage of roadblocks in science. It's just one big roadblock. Scientists have to keep looking around the corner or figure out how to get through somehow. 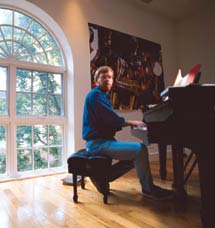 Michael Hawley is not a man who believes in downtime. The director of special projects at MIT's Media Lab, he has helped develop everything from digital books to digital noses. Many of his leisure hours are spent practicing on his beloved Steinway, which had to be hoisted into his apartment through this window.

There was no one moment when I realized I was going to be a scientist. I'm kind of a perfect mix of my parents. My dad was an electrical engineer at Bell Laboratories in Murray Hill, New Jersey. We'd go to the supermarket and bump into guys who'd won Nobel Prizes. I started getting summer jobs at Bell Labs in high school. My mom was into English literature and music. I was really lucky to have the yin and the yang. Science has a heart, but scientists are often a little off the deep end. They're not always great humanitarians. While I was in high school, I went to hear an amazing guy who played the organ at the Presbyterian church. When you heard music coming from John Quinn's pipe organ, you wanted to jump out of your seat. Afterward, I asked if he took students and he said, "Sure." That was a really lucky break in my life, and it led to a scholarship at Yale. The kind of relationship that you have—if you're lucky—with a really good music teacher is very special. I sometimes wish my science education had been blessed to the same degree. At Yale, I don't think I ever had a lesson with my teacher Ward Devenny that was less than three hours long. What's interesting is the connection you come to feel for other people in the field. It's sort of like six degrees of separation. I could count back through four teachers and know that my teacher's teacher's teacher was Franz Liszt. You realize that you're not that far off from these people. And when you learn about the circumstances of their lives, you start to appreciate the struggles they went through.

In the fall of 1979 I was walking across the Yale campus when I first ran into Bart Giamatti, who was president then. He stopped me, and we had a freshman-to-president conversation. He asked me if I had a girlfriend yet. I said, "Yeah." He said: "That's pretty good. You're not spending too much time in classes, are you?" I was expecting him to tell me to write neatly in my blue book and to amortize my dad's investment. Instead, he wanted to know how many friends I had. He said the most valuable thing I could do at Yale was to meet as many people as I could, whether they were classmates or teachers or visitors because behind every one of those faces was a different take on a vast world. He thought that understanding that and living that was the best way to be liberally educated. And he was living his advice in talking to me. That experience taught me not to be shy about asking questions. One of the neat things about successful scientists is that a lot of them still have a childlike quality that allows them to blurt out questions that a lot of people are thinking but would never blurt out, so they would never get the answer.

When we were in college, some friends and I decided to paddle a long river in Quebec, the Mistassini, which means "stone in water." It's a bad news river. A seaplane dropped us in the middle of nowhere. There are no roads. The forests are impenetrable. The only way out is to work your way down the river. It was raining, and it was 40 degrees. The river was full of these wild rapids, and we kept falling in. After the third day everything we had was soaked, and we were shivering all the time. Late one day, when we were pitching a tent in the rain, my friend Ed Chaban was chopping a twig off a tree when the knife blade broke, went into his wrist, and cut an artery. He was ash white. He could have bled to death. It was the first time I really had to do first aid. I remember digging in to get the first aid kit and finding it was basically a bag full of water. The instruction book was one big wad of pulp. We took turns applying pressure. We froze for two nights in that miserable rainy swamp, each of us taking turns watching Ed and making sure the wound didn't open. We couldn't stitch him up, but by the time we got out of there the skin had started to heal over, and the artery had pulled itself back together. The experience told me a lot about the value of common sense—which scientists sometimes forget when they get consumed in the details. It's the kind of event that really focuses the mind. You stop thinking about a whole bunch of little distractions and do what needs to be done. That's a large part of what you have to do to make progress in any scientific field. 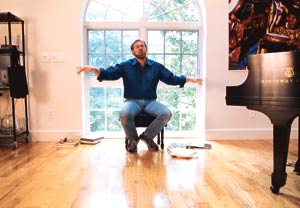 Michael Hawley is not a man who believes in downtime. The director of special projects at MIT's Media Lab, he has helped develop everything from digital books to digital noses. Many of his leisure hours are spent practicing on his beloved Steinway, which had to be hoisted into his apartment through this window.