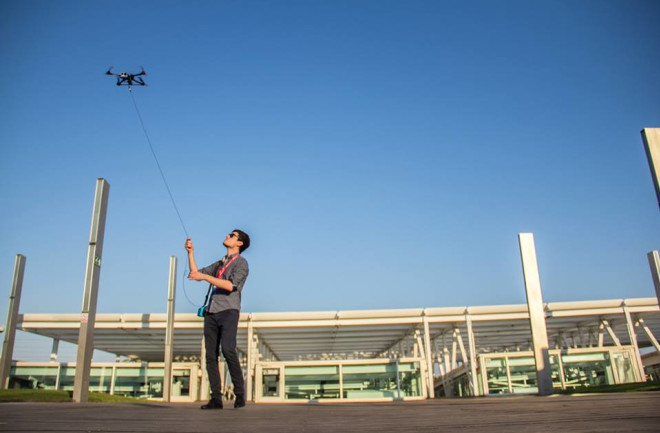 (Credit: Fotokite) While some businesses are eager to unleash drones and put them to work, one company wants to leash them up. The Fotokite Phi is a drone, built by Zürich-based Perspective Robotics, for people who have no interest in actually flying a drone. The Fotokite is a fold-up quad with a GoPro payload that’s tethered to a leash, which makes operating a drone as simple as walking a dog.

Fotokite’s creators have stripped away all the bells and whistles that are usually packed into drones, resulting in a simple-to-use quad. You maneuver the drone with simple hand gestures via the “smart leash.” The leash ensures the drone never flies off where it shouldn’t, and a little tug on the leash is all that’s needed to reel the Fotokite in for a soft landing. If you can fly a kite, you can fly the Fotokite.

The quad’s inventor, Sergei Lupashin, was inspired to build an easy-to-use photography drone after seeing pilots flying UAVs during protests in Russia back in 2011. He wanted a drone that not only snapped great pictures, but was also safe to use in windy or crowded places. Further, the leash makes it abundantly clear who’s operating the drone, which is a level of accountability passers-by and property owners can appreciate. And here’s another plus: Since the drone is tethered, it’s technically classified as a kite under Federal Aviation Administration guidelines.

Lupashin and his team are currently raising funds on Indiegogo, and Fotokites can be pre-ordered with prices starting at $249. So far, they have raised $100,000 of their $300,000 goal. If you have no qualms about walking a pet drone down the sidewalk, you might want to check out the Fotokite.