: Scientists are using nanoparticles to develop ways to fight bacteria that are resistant to conventional antibiotics. These tiny drugs physically punch holes through bacteria instead of killing them chemically, which means that they could be especially effective on antibiotic-resistant bacteria strains like the dangerous methicillin-resistant Staphylococcus aureus (MRSA). “The applications are going to be very diverse, whether we’re talking about wound healing or dressing, skin infection, and quite possibly injections into the bloodstream,” James Hedrick, master inventor at IBM Almaden Research Center in San Jose, California, told Popular Science. How the Heck: 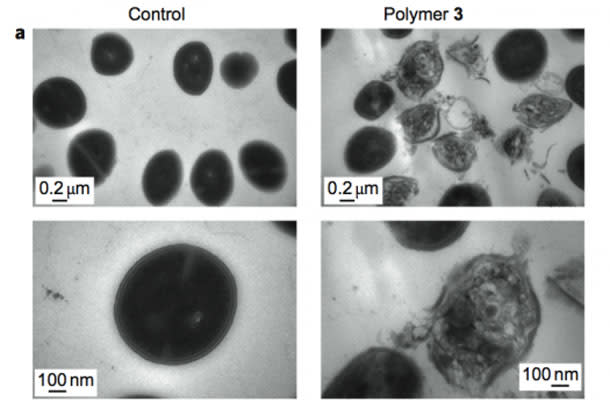 Next Up: Now the scientists are marking larger batches of nanoparticles so that they'll have enough for tests in humans. In the years to come, IBM hopes to partner with healthcare companies to make the drug available for medical use. Reference: Nederberg, F. et al. "Biodegradable nanostructures with selective lysis of microbial membranes." Nature Chemistry. doi:10.1038/nchem.1012.

bacteria cell; the right-hand images shows the bacteria with its cell wall broken by nanoparticles. IBM.