Hydropower in a Pipe 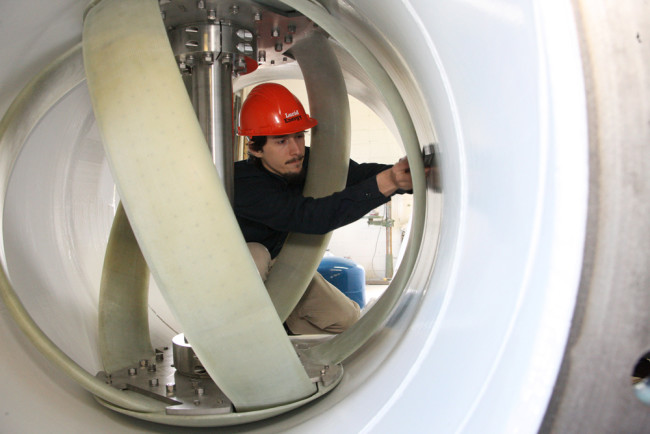 Turbines installed in water and sewage pipes can generate power — and revenue — for cities. | Cathy Cheney

Beneath Powell Boulevard in Portland, Ore., a newly laid 60-foot section of main carries water downhill from a nearby reservoir. But this is no ordinary water pipe: A series of four turbines spin within the 42-inch main, generating power as the water flows.

Drinking water and sewage systems account for between 3 and 4 percent of total U.S. energy consumption and absorb up to 40 percent of municipal energy budgets, according to the EPA. The LucidPipes, created by Portland-based startup Lucid Energy, help address both of those challenges. The $1.3 million Portland system, which came online in March, produces enough renewable energy to power about 150 homes, and the resulting power revenues can help pay for much-needed infrastructure upgrades.

The LucidPipes work by taking advantage of gravity-driven flow. The turbines’ svelte aerodynamic blades skim off surplus pressure from the moving water rather than impede it the way a conventional hydropower turbine would.

“Our system is based more on the science of a wind turbine or an airplane wing,” says Lucid Energy CEO Gregg Semler. And it brings none of the environmental impacts that come with hydropower from dammed rivers.

Gravity-based water systems can meet 10 to 15 percent of their power needs with LucidPipes, and at an attractive price. LucidPipes generate power at 5.6 cents per kilowatt-hour in Portland, less than half the average U.S. residential power rate.

Semler estimates there is enough spare pressure in U.S. and Canadian water systems to support several thousand installations like Portland’s.

[This article originally appeared in print as, "Hydropower in a Pipe."]