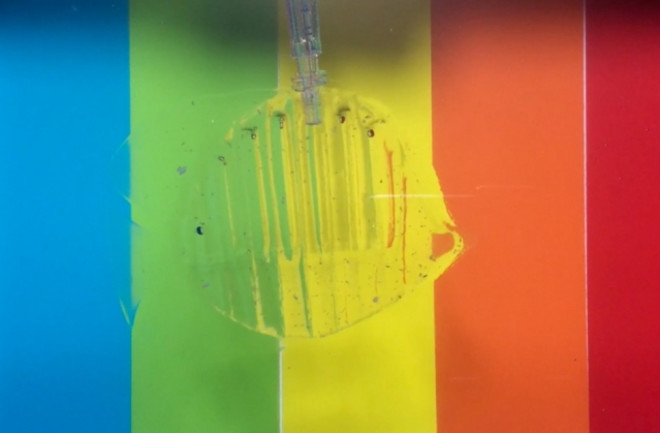 (Credit: Hyunwoo Yuk/MIT Soft Active Materials Lab) Caught by an invisible hand, these fish don't know what hit them. The transparent appendage isn't the latest fad in fishing technology; however, it's a demonstration of the power of soft robots made from hydrogels—a squishy blend of polymers and water. Researchers from MIT devised a way to 3D-print custom structures from the material and bring them to life with the help of a simple water pump. The real struggle was devising a way to make the robots fast and strong while maintaining their pliability and transparency. Xuanhe Zhao, an associate professor of engineering, and his team resolved those issues by using water to power the hand. The robot is made of a series of hollow hydrogel cubes fused together, allowing them to bend and stretch as water is pumped in and out. This gives the robotic hand the ability to exert a few newtons of force in about a second — much better than previous designs that relied solely on osmosis for power. https://www.youtube.com/watch?v=F6vSHmHw1gw The researchers were inspired by glass eels, who rely on their clear bodies to hide from predators as they travel thousands of miles from their birthplace to feeding grounds in North and South America. Other soft robots are usually made from rubber that may not be safe for medical use. Hydrogels, which are made largely of water, allowed them to improve safety while maintaining the flexibility and durability necessary to grab a wriggling fish. They say that their design is both soft enough and strong enough to use in medical procedures where delicacy is key. The team previously developed hydrogels that bond to materials like glass, ceramic and metal, including one design that incorporates an elastomer coating to keep the hydrogel from drying out. For now, their hand will have to stay in the water. Hydrogels shrivel up quickly if they aren't kept wet, meaning that the soft robotic hand would soon become a withered claw on dry land. Such designs could conceivably work inside our bodies, however, and could be useful for things like the recently announced heart-hugging robot. Either that, or the world's sneakiest fishing lure.