How Trucks Can Make Delivery Drones a Reality 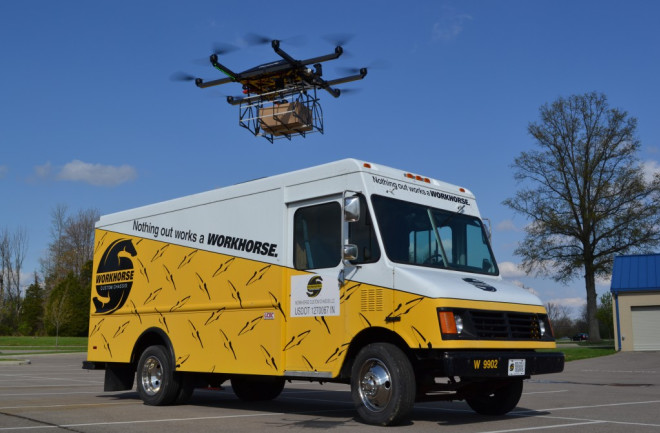 A HorseFly octocopter drone could fly from delivery trucks to drop off packages. Credit: Workhorse Group Delivery drones may still seem a ways off because of new U.S. commercial drone regulations requiring drones to stay within sight of their human operators on the ground. But such rules pose no problem for a U.S. startup that developed a drone capable of launching from delivery trucks and dropping off packages within the driver's line of sight. The HorseFly drone developed by Workhorse Group, an electric vehicle company in Cincinnati, Ohio, is an octocopter designed to ride aboard a delivery truck. Once it gets a delivery mission, the drone can take off through the truck's roof with a 10-pound package and automatically fly to its destination using GPS. A remote human pilot located in the equivalent of a command center will manually guide the drone down the last 100 feet to the ground to avoid trees or similar obstacles. The delivery truck driver can also keep an eye on the drone's progress from the ground and can always hit a recall button for the drone to abort its mission and return—a necessary step under Federal Aviation Administration (FAA) commercial drone rules set to take effect on Aug. 29. "A lot of journalists said the holy grail of drone delivery got left out in the cold because Amazon can't travel 30 miles from warehouse to the suburbs to deliver a book in 30 minutes," say Steve Burns, CEO of the Workhorse Group. "We built ours from the get-go to work with line of sight; a major delivery company is within line of sight of almost every business or house in America sometime during the day." https://www.youtube.com/watch?v=L8LepC4FNlg The impending FAA regulations enable businesses to legally operate commercial drones for the first time in the United States. Previously, commercial drone operators could only fly by applying for section 333 exemptions in a process that could take months. But the new FAA rules come with certain restrictions for commercial drones such as requiring a human operator and having to stay within visual line of sight of the person at all times. That means delivery drones cannot automatically drop off packages dozens of miles away from human supervisors. Workhorse handily gets around that restriction because its delivery drones only make "last mile" deliveries between delivery trucks and homes or businesses.

A remote pilot can help guide the HorseFly delivery drone during the last 100 feet of descent. Credit: Workhorse Group Burns and the Workhorse Group previously sold a number of E-GEN electric trucks to shipping giant UPS earlier this year. That opens the door for UPS or another shipping company to possibly begin using the combination of Workhorse's delivery trucks and delivery drones once commercial drones become legal on Aug. 29. Workhorse has already been testing its delivery drone and truck combo after first getting a section 333 exemption from the FAA. The federal regulators currently require the delivery truck to be stopped instead of driving while the drone is deployed with a package. But Burns thinks the delivery drones could first prove worthwhile for rural areas with homes that have long driveways or roads leading up to them.

Delivery drones hold the promise of saving drivers time in making deliveries and boosting their overall efficiency. More efficient human employees can translate into significant cost savings for shipping companies such as UPS when the average delivery driver gets paid $30 an hour. Burns compared the added presence of a delivery drone to giving a human driver a very long arm. Eventually, he envisions looser FAA regulations allowing the driver to more easily multitask while the drone does its own thing. "If we can make the driver more efficient, we can get more dividends than if we came up with 100 mile per gallon truck," Burns says. Delivery vehicles have not seen much innovation over the last 50 years, Burns said. Part of the problem is that not many companies find it worthwhile to develop a more fuel-efficient delivery truck or similar vehicle if they can only sell 20,000 vehicles each year to the various shipping companies.

A HorseFly delivery drone can carry up to 10 pounds worth of package. Credit: Workhorse Group Workhorse kept development costs down by using proven technologies for its E-GEN electric trucks; the same Panasonic batteries used by Tesla electric cars and a backup gas generator used in BMW vehicles. The E-GEN hybrid electric trucks deliver the equivalent of 30 miles per gallon, or about five times better fuel efficiency than a typical delivery truck that gets 5 miles per gallon. The average operating cost of a Workhorse electric truck is about 30 cents per mile compared with $1 per mile for diesel trucks. A delivery drone that runs on batteries and can recharge while riding around on a Workhorse truck could achieve an operating cost of just 2 cents per mile. That is why Burns sees this time period as a potential "Kitty Hawk" moment for delivery drones, similar to when the Wright Brothers flew the first aircraft in North Carolina on Dec. 17, 1903. "There is a reasonably good chance that bringing drones into delivery is just as important as the combustion engine was to delivering goods," Burns says. "A drone uses two or three cents per mile of electricity, is virtually zero maintenance and pollution, and requires very little driver time."