Highway to the Green Zone? Navy to Test a Supersonic Biofuel Jet 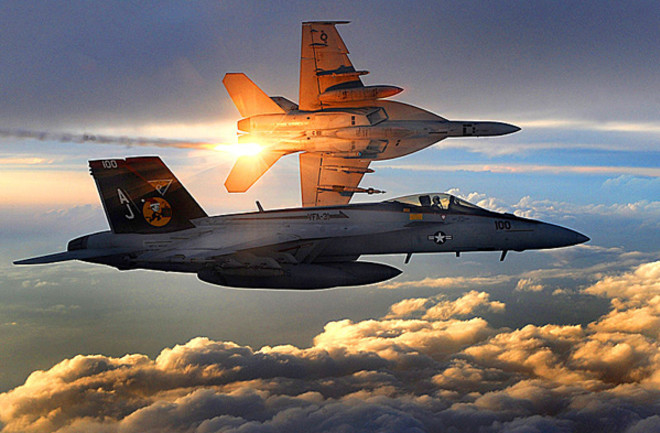 The F/A-18 Super Hornet burns through more fuel than any other aircraft in the United States Navy, whose pilots have flown more than 400 of the jets. But with the week of Earth Day upon us, the Navy is trying to use the jet to show it can mend its fuel-guzzling ways. Tomorrow the "Green Hornet," an F/A-18 running on a half-petroleum, half-biofuel blend, will make a test flight from Maryland.

Secretary of the Navy Ray Mabus has set a target that half of naval energy consumption will come from alternative sources by 2020. A “Great Green Fleet,” to sail by 2016, will include nuclear ships, as well as surface combatants with hybrid electric power systems using biofuel and biofuel-powered aircraft [National Geographic]

. Before we can talk about ambitious deployment targets, however, the Navy has to prove that its "green" fighter has got what it takes, and so the experimental F/A-18 will try to break the sound barrier. The Green Hornet's biofuel constituent is made from Camelina sativa, also called gold-of-pleasure or false flax. (It earned the latter moniker for surviving by looking increasingly like real flax, a talent that garnered it a spot in our gallery of plant and animal impostors.) As a biofuel, Camelina has the advantage of growing with little energy input. Humans have cultivated the plant for millennia; the Romans used its oil in lamps and in cooking (pdf). Another advantage is that

. However, just as ordinary car engines can't run on strictly ethanol, the design of the engine seals on the F/A-18 still demand a substantial component of conventional fuel. Even advanced biofuels have their detractors among environmentalists and energy gurus, but the military's potential embrace of them and other technologies—like electric vehicles, solar, and wind power—could supply the marketplace boost they need.

The size of the military's investment will create economies of scale that help bring down the costs of renewable energy, and military innovations in energy technologies could spread to civilian uses, just as the Internet did [Miami Herald]

. And perhaps when you go to an air show in a decade, the Blue Angels' F/A-18s will be flying on biofuel. Related Links: 80beats: London's Garbage Will Soon Fuel Some British Airways Flights 80beats: Air New Zealand Tests Jet Fuel Made From Poisonous Jatropha Seeds 80beats: Super-Green, Algae-Derived Jet Fuel Passes Tests With Flying Colors 80beats: DARPA Wants a Biofuel Jet, While Germany Works on a Hydrogen Plane DISCOVER: Impostors! Ten Species That Survive By Imitation (photo gallery) DISCOVER: The Second Coming of Biofuels DISCOVER: It's a Bird, It's a Plane, on flying in formation to save fuel Image: Staff Sgt. Aaron Allmon, U.S. Air Force