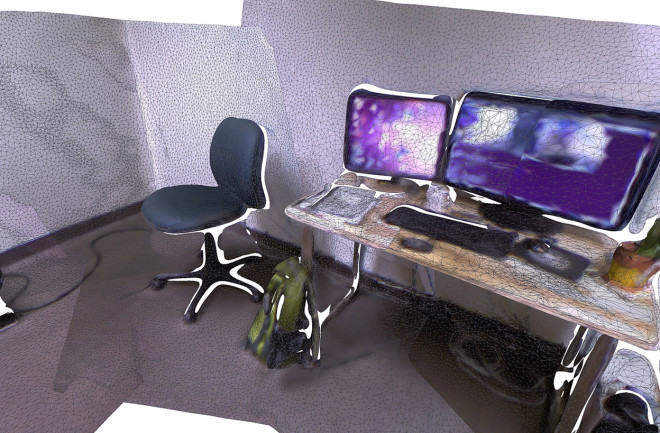 Move over, Instagram: The first handheld, real-time 3-D camera is here. Hold the Lynx A up to your friend and walk around her. Before your eyes, it scans her appearance and her shape, then builds a rotatable image in three dimensions.

Send that file to a 3-D printer, and you can print out a wedding-cake statue. Ask your friend to dance, and the Lynx A instantly captures her motion, turning her into a peppy stick figure. It can model complex spaces, too, like an office, car trunk or cathedral.

Inventor Chris Slaughter, a former University of Texas at Austin electrical engineering student who spearheaded the Lynx’s development, got interested in 3-D machine vision in 2011 after a Silicon Valley internship working with robots — which, he learned, have an important weakness.

Most robots are slow at navigating, explains Slaughter, because their sense of sight — their computer vision — is clunky, power-hungry and slow. He came back to UT determined to figure out a better way to capture video that understands shape, spaces and motion.

Working with his Ph.D. adviser, Sriram Vishwanath, Slaughter realized that most commercial image- and motion-capture software sacrifices processing speed for accuracy. This means that software takes hours, if not days, to process every detail in a scene.

But Slaughter and Vishwanath realized that today’s processors are powerful enough to crunch every data point a digital camera can bring in. That ability to accurately capture and process everything makes it possible to turn visual data into 3-D images quickly. So the two set about designing a prototype 3-D camera. In 2012, they founded a company, Lynx Labs (named for the graceful cat with acute vision), and spent another year developing a marketable version.

The Lynx A camera has graphics power equivalent to about nine tablet computers. When the user holds it up to an object or space, it computes a 3-D image within seconds. Architects can turn its scan of a room into a CAD file, making tape measures unnecessary. Fabricators can scan objects, then export them to a 3-D printer which replicates a model, a capability that attracted backing from a prosthetics maker. And moviemakers can create special-effects characters based on actors’ body motions without the pricey motion-capture studio.

The Lynx A uses a standard color camera lens combined with an infrared-light projector, which lays a pattern over whatever it is looking at. A receiver then observes the way the pattern warps. The graphics processing unit makes billions of calculations per second to put together the visual and IR data. Together, they build a detailed, instantly updated representation of what the camera sees.

The Lynx team has shipped out its first batch of cameras to the company’s Kickstarter backers, and they’re working out new kinds of applications for the device: industry (scanning factory parts for quality control), military (studying the surface of the ground for evidence of buried explosives) and creative (custom dolls and model airplanes).

In 2014, Slaughter estimates, 3-D cameras will come to smartphones. Get ready for the proliferation of 3-D selfies.

[This article originally appeared in print as "Taking 3-D Polaroids."]