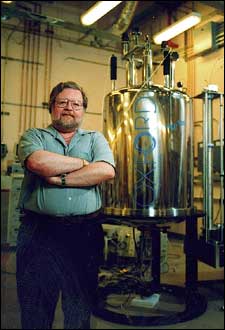 Living cells elude scientists at every turn. The best optical microscopes offer images of stunning clarity but force researchers into a frustrating catch-22. To examine a cell at the molecular level, they must either kill it by impregnating it with resins or taint it with sensitive dyes, which can alter cell behavior even as they beautifully illuminate delicate structures. And magnetic resonance imaging (MRI), used clinically in hospitals, excels at laying bare specific body parts, but its resolution is still too coarse to render detail at the cellular level.

Two years ago, a team of 12 scientists led by Robert Wind, a 59-year- old Dutch physicist, decided to try to combine the best of both worlds. They married a 5-foot-tall superconducting resonance imaging magnet to an optical microscope to observe a single cell suspended in a narrow, transparent chamber. The images produced by this duet have given scientists their first noninvasive view of living cells in action. "Now we can see all the goodies," says Wind, "inside and out." Not only can they peer into a cell's nucleus but they can also monitor changes in a cell's shape and chemical content.

In a promising trial run, Wind and his colleagues observed how a living cell responds to stress caused by rising temperatures. They watched in wonder as a frog's egg ceased producing healthy proteins and instead began churning out proteins that hastened its demise. Now the team is preparing to use a grant from the National Cancer Institute to study mammalian cells. Wind's associate Eric Ackerman, a molecular biologist, says a newfound ability to see how cells fight off diseases— or fail to— may allow them to answer an extraordinary question: "Is chemotherapy working after the first hour?" Wind believes the new microscope is the best tool currently available for observing definitively how drugs, mental stress, and man-made contaminants affect health. "Why shouldn't I want to learn what our environment is doing to us?" says Wind. "I'm not just a physicist. I'm also a human. I have a selfish interest at stake."