New bots will explore everything from Mars to your mouth—and perform surgery. 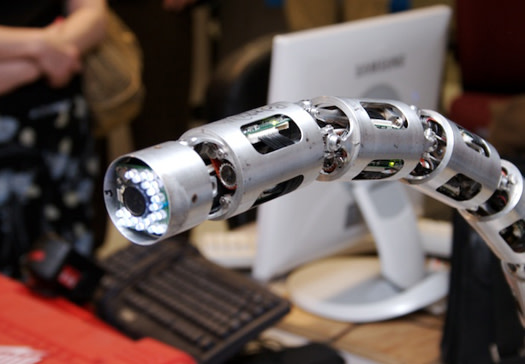 Photo Credits: All text and photos by Chris Dannen

From disappearing natural resources to costly medical care, humanity's problems lie out of human hands, according to the researchers at Carnegie Mellon University's Robotics Institute. To prove it, they're using their team of 300 faculty and students and their $50 million annual budget to build bots that will explore everything from Mars to your mouth--and perform surgery when they get there. 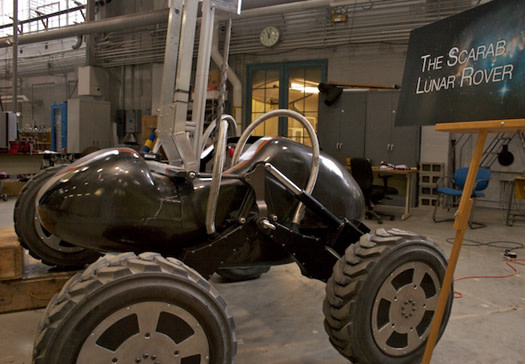 One of their flagship efforts is a lunar rover concept vehicle called Scarab, which may be the forebear to future generations of robots that will scour the moon for concentrations of hydrogen, water, and volatile chemicals that would be critical for supporting a lunar colony.

Much of its prospecting will go on deep inside lunar craters, where it can't rely on solar panels and cameras like most spacecraft. So Scarab has to be able to power itself and navigate in complete darkness at temperatures down to -385 degrees Fahrenheit. A radioisotope generator in its trunk provides heat and propulsion, and experimental laser-based sensors operate like visual sonar, reading distortions in their beams and allowing the massive articulated axles to react to the terrain. 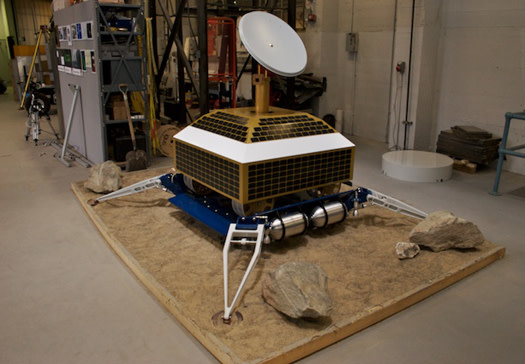 The world's hunger for exploration, both bodily and extraterrestrial, is dwarfed only by its hunger for entertainment. With a prize of $20 million--nearly half the Robotics Institute's annual budget--the Google X-Prize is an opportunity CMU's researchers can't pass up.

To win it, they'll have to transport a rover to the moon and send back a series of transmissions, the most difficult of which will be high-definition video of the lunar surface. Hence the dish atop this X-Prize prototype, which can rotate on a gimbal to track Earth and keep its video transmitting clearly. 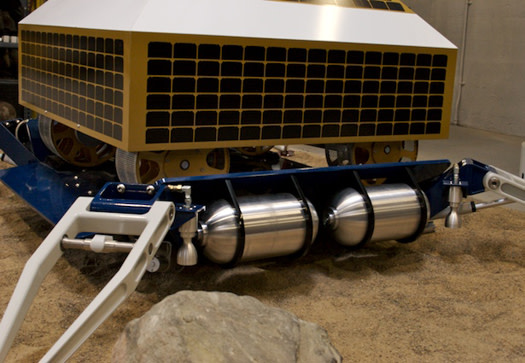 Named P2, this iteration of the X-Prize concept rover has vertical solar panels to absorb energy even at sunrise and sunset and sports a white band around its shell that will act as a radiator during the intense heat of lunar midday. Beneath its solar panel skirt, P2 looks a lot like its bigger brother, Scarab, with articulated axles that will allow it to traverse the moonscape and find the site of Apollo 11. There, the rover will accomplish its primary feat: transmitting video of the original lunar landing site back to Earth.

The lander's thrusters, designed by Raytheon and seen here next to their propellant tanks, will allow the rover to descend vertically to within 10 feet of its target landing coordinates near the Sea of Tranquility. It's an ambitious design, on an even more ambitious timeline: The team plans to launch its rover to the moon inside of 18 months. 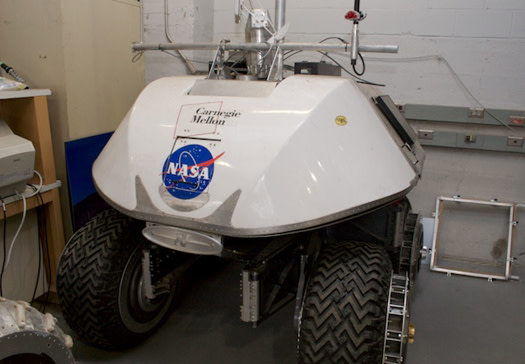 The dusty corners of the Robotics Institute serve as retirement spots for robots who've paved the way in their technological fields. This is Nomad, an autonomous bot that preceded Zoe in the Atacama Desert and was later used to search for meteorites in Antarctica. In the late '90s, its in-wheel propulsion, transforming chassis, and hi-res stereo vision were cutting edge; now it waits for the company of robots like Scarab and the X-Prize robot in the afterlife. 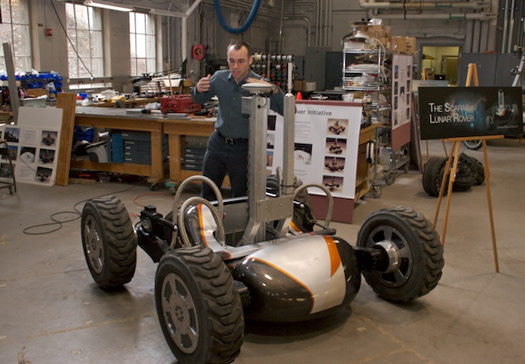 Associate research professor David Wettergreen demonstrates how Scarab will squat its 550-pound body close to the lunar surface and employ a Canadian-made drill to pierce the regolith (moon rock) and analyze the soil below it. Because Scarab isn't meant to return home, it will have to analyze soil itself; samples are fed into its reactor, where they are cooked and analyzed for makeup and concentrations.

If that sounds time-consuming, don't worry: Scarab's power plant would keep it roving the moon's surface for nearly a decade, albeit at a poky .2 miles per hour. Funded through NASA's In Situ Resource Utilization program, Scarab is part of a generation of autonomous robots meant to take human risk out of prospecting for resources in increasingly hostile, remote locales. 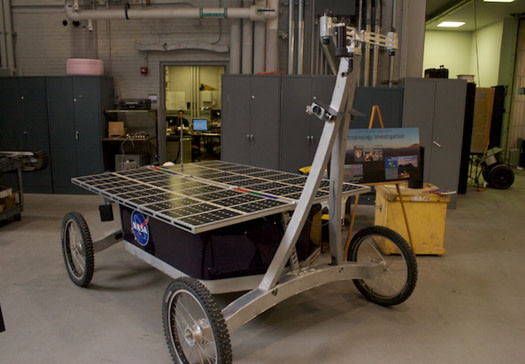 For bots like Scarab to be able to explore hostile planets completely unsupervised, researchers must write its complex behavioral software here on earth and then test it to see how it works. For that there is Zoe, a survey rover that researchers have dispatched several times to the Atacama Desert in Chile alone. "We just drop her there and leave," says Wettergreen, who describes Zoe as a giant fluorescence-imaging camera that searches the desert soil for microorganisms.

To navigate autonomously, it uses a panoramic imager made of a triplet of high-resolution cameras mounted on a necklike pan-tilt mechanism. With these cameras, Zoe can not only traverse obstacles but also establish waypoints and create maps of the nearby terrain that help it make decisions about steering and direction. 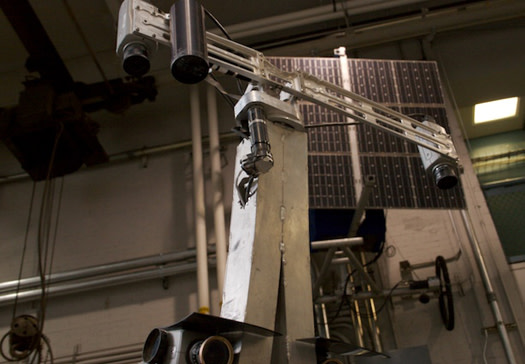 While in the Chilean desert, Zoe receives daily exploration goals and uses its planning software to schedule its day (video) to maximize discoveries and minimize energy use. And it does it all without GPS or compass; neither would be available in space.

If its software continues to prove its worthiness in the Atacama, which was chosen for its alien-planet-like dearth of life, it could be included in a 2009 Mars rover that will evaluate that planet's wind, sun, and moisture conditions to find areas with the highest probability of life. 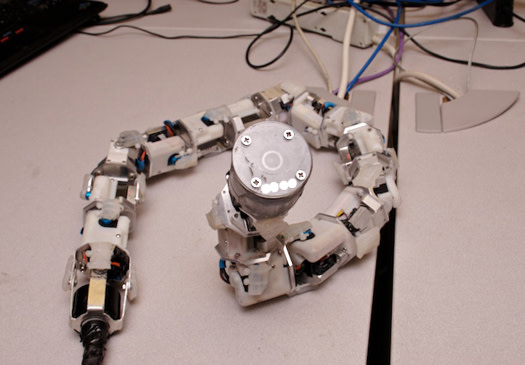 After September 11, it became painfully clear that some disasters are beyond the scale of human relief efforts--but not beyond the reach of the lowly snake. Flexible, powerful, and incredibly versatile, the slithering bots being developed at the Robotics Institute's snake robot lab can not only work through high-density rubble but can also climb poles (video), worm their way up (video) the insides of pipes, and roll like a wheel to move efficiently across flat areas. 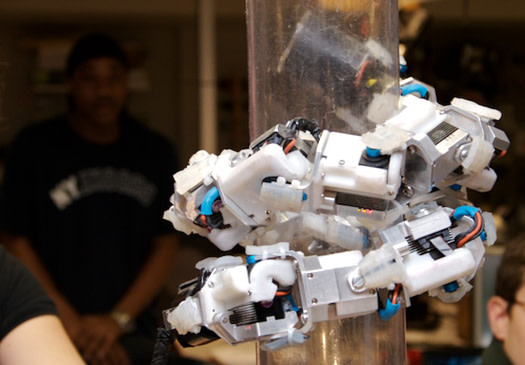 Equipped with a camera at its head, this snake could also be retrofitted with a waterproof skin and on-board batteries for all-condition remote operation in disaster-relief scenarios, where it would be used to locate victims before responders started digging blindly. The snakes are also being tested in industrial applications, where they can evaluate interior damage to complex machinery without time-consuming and expensive disassembly. 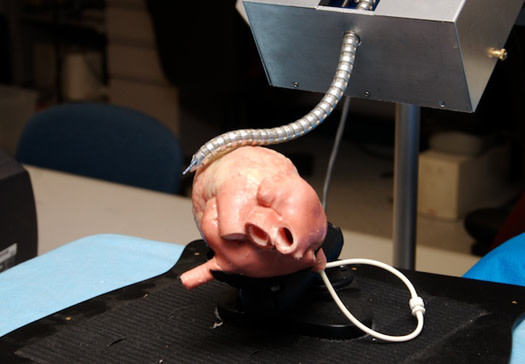 Imagine having major surgery without any exterior incisions at all. That's the promise of this half-inch-wide snake robot, seen here navigating a model human heart. It enters into a patient's mouth and then travels down into the body cavity, through the wall of the stomach before removing, say, the gall bladder. With a reduced chance of infection, quicker recovery time, and less anesthesia required, snake robot operations would stand to greatly reduce the cost and malpractice liability of vital procedures. 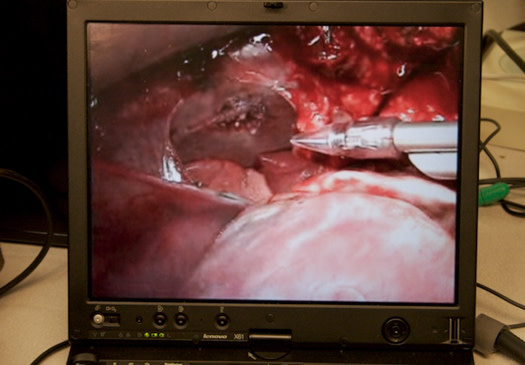 Surgery-by-snake isn't as far-fetched as it sounds. While prototype snake robots were being demonstrated to journalists at the Robotics Institute, a live pig was undergoing cardiac surgery from a prototype snake robot at nearby University of Pittsburgh hospital. Associate professor Howie Choset, who runs the snake robotics lab, was observing the procedure remotely from a live feed on his laptop. 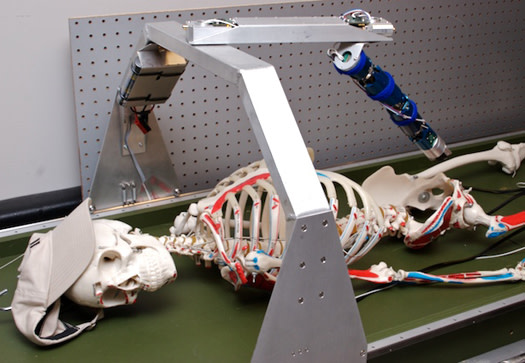 Fortunately for the squeamish, some snake robots will be put to medical use outside the body. This concept model of a robot-equipped LSTAT stretcher could be used in battlefield scenarios where the speed of medical attention is the primary factor in preventing fatalities. Fixed to a sliding chassis, this triage robot would work its way up and down the body of a wounded soldier, taking vital signs and inspecting wounds in the crucial moments between injury and treatment.