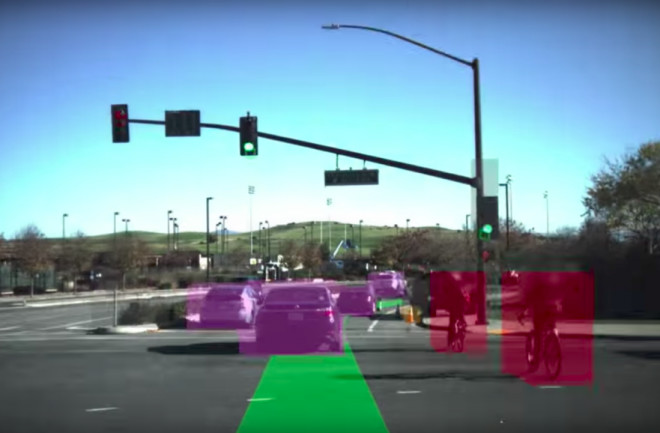 A color-coded view from a self-driving car operated by Waymo. Credit: Waymo Silicon Valley tech giants and Detroit automakers have to convince people to trust self-driving cars before they can sell the futuristic technology to customers. That may prove tricky considering the public's lingering fears and concerns regarding self-driving cars. A recent AI-assisted analysis of more than one trillion social posts revealed that scared-face emoticons related to self-driving cars rose from 30 percent of all emoticons used on the topic to 50 percent by 2016. Top concerns mentioned in social media included self-driving car fears of being hacked and "robot apocalypse" scenarios of technological change. It would be silly to interpret "scared face" emoticons and emoji posted on online as being fully representative of public attitudes toward self-driving cars. But it's still a useful sign of the public relations challenge facing companies hoping to sell the self-driving car future to the broader public--especially given that about 70 percent of all Americans use some form of social media. The recent social media findings by Crimson Hexagon, an analytics company based in Boston, also generally line up with previous studies on public attitudes toward self-driving cars. Any company that wants to sell a positive image of self-driving cars will almost inevitably have to confront online narratives of nightmare hacking scenarios and doomsday visions. Crimson Hexagon's report looked at one trillion social posts from sites such as Twitter, Facebook, Instagram, Reddit, and online forums, as well as some car-specific sites such as Autotrader and Edmunds. The company performed the analysis using machine learning--a fairly common AI technology nowadays--to sift through patterns in words and emoticons within the social media posts. The machine learning AI trained specifically on using natural language processing and was also able to help identify some of the emotional sentiment behind certain words or phrases. Concerns about self-driving cars being vulnerable to hacker attacks seemed fairly prominent with 18,000 mentions. These self-driving car fears were often driven by mainstream news reports that discussed hacking vulnerabilities and self-driving car safety. But doomsday fears of technological change that revolved around "apocalypse, doomsday and the destruction of humanity" came in close behind with 17,000 mentions. The online talk was not all doom and gloom surrounding self-driving cars. About 6,000 social posts focused on the positive side of self-driving cars as a "technological revolution that harnesses big data and machine learning." Another 7,000 social posts discussed self-driving cars as a possible solution to traffic jams and highway congestion even as they also featured angry venting. And 4,000 social posts talked up the innovation behind self-driving cars and their awe of the entrepreneurs and engineers developing such technologies. Many past and recent direct surveys have found that people also have self-driving car fears about personally trying out the vehicles. Elegant E-Learning, an online service that provides practice tests for driving licenses, published a report in April based on responses from 158,000 visitors to its websites. The most common answer among U.S. respondents was that they would be "very concerned" about riding in a fully autonomous driverless car, but a somewhat smaller number said they would "not be concerned at all." On a separate question, a larger percentage of U.S. respondents said that self-driving car benefits would not outweigh the negatives, whereas a smaller percentage said the benefits would outweigh the negatives. Still, there were some mixed feelings of broad optimism tempered by personal self-driving car fears among U.S. respondents. About 31 percent said they believed the benefits of self-driving cars would outweigh the risks and costs, even though the same respondents said they would personally be concerned about riding in such autonomous vehicles. https://www.youtube.com/watch?v=6hbd8N3j7bg There is still room for optimism among the companies developing self-driving cars. Past studies have shown that people can quickly become comfortable with semi-autonomous and more advanced self-driving cars once they get to try the vehicles out for themselves. The idea of gradually exposing more people to the benefits of riding around in self-driving taxis and other vehicles seems to be the guiding philosophy for a number of companies such as ride-hailing giant Uber, MIT startup NuTonomy, and the company Waymo spun out of Google's former self-driving car project. The latter even launched its "early rider" program in April for certain residents of Phoenix, Arizona to try out Waymo's fleet of self-driving vehicles. If more people get firsthand experience with such vehicles, the self-driving car fears may eventually shift away from doomsday scenarios to the more mundane complaints that surround ordinary transportation options such as public transit and ride hailing services. That many not exactly sound like a PR win, but it's a much better case for self-driving car companies than being seen as harbingers of the robopocalypse.