Grocers Get Robotic Help to Compete Against Amazon 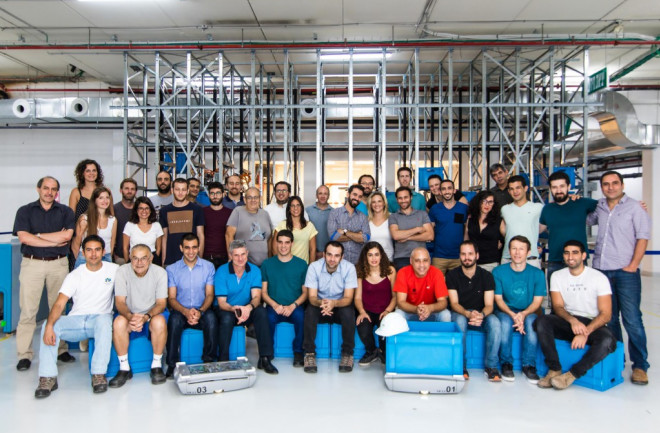 The startup CommonSense Robotics aims to create automated warehouses that enable faster and cost-efficient grocery delivery within cities. Credit: CommonSense Robotics "What happens if grocery retailers can help you put a fresh dinner on the table faster than pizza delivery and cheaper than restaurant delivery?" That vision comes from CommonSense Robotics, an Israeli startup with plans to open its first AI-run fulfillment centers staffed by both robots and human workers in Israel, the United States, and the United Kingdom before the end of 2018. Such a service could help local grocery stores survive the coming onslaught from Amazon's aggressive expansion into online grocery shopping. Unlike restaurants, grocery stores have generally been slower to give customers the option of online ordering and home delivery. One big reason is that almost nobody has figured out how to make money from offering online grocery shopping and delivery, given that many customers would rather handpick their produce at the lowest supermarket prices and avoid paying extra service fees for someone else to pick out their groceries and deliver. CommonSense Robotics thinks it can transform that usual money-losing proposition for online grocery services into a profitable business: a business plan that raised $20 million in the startup's first big round of venture capital funding. "If we can change the availability and access to groceries, people don’t have to go to the store and don’t have to pay extra," says Ran Peled, head of marketing at CommonSense Robotics in Tel Aviv, Israel. Smaller neighborhood grocers have good reason to want a cost-efficient system for fulfilling online grocery shopping orders. Since Amazon bought the Whole Foods chain of natural food stores last year, the corporate behemoth has looked to tempt customers—especially Amazon Prime members who pay $99 each year—with the convenience of quick home deliveries for online grocery orders. In February, Amazon began offering two-hour delivery of Whole Foods items for Amazon Prime members in four U.S. cities, as a trial run for what could be a nationwide expansion of such service. To fulfill such online orders, Amazon has its own pickers to go through the aisles of Whole Foods stores and a fleet of contracted drivers to make the home deliveries. Faced with that threat, a growing number of large and small grocery retailers have already signed on with Instacart, a delivery startup that hires shoppers to fulfill online orders, in an effort to stay competitive. But CommonSense Robotics may offer yet another way for smaller players to get into the online grocery shopping game.

The centerpiece of the CommonSense Robotics plan rests upon automated fulfillment centers that require just 10,000 square feet of space, rather than the huge fulfillment centers operated by the likes of Amazon that can take up almost a million square feet. The startup has already been operating a prototype of its fulfillment center in a parking garage in Tel Aviv, even as it builds its first commercial facility.

CommonSense Robotics envisions micro fulfillment centers that rely heavily upon robots to sort inventory and retrieve boxes filled with products. Credit: CommonSense Robotics The space efficiency comes from fitting all the stored products into plastic boxes that sit inside towers of racks reaching almost from floor to ceiling. Three fourths of the space in each facility consists of plastic boxes sitting inside towering racks reaching almost from floor to ceiling. Such a space-efficient arrangement makes use of robots that can squeeze into the narrow spaces between racks as they sort inventory or fetch boxes. As online grocery orders come in, the robots race around to pick up boxes containing various products. The robots bring those boxes to human employees standing or sitting in other parts of the fulfillment center, so that nimbler human hands can pick out individual products and pack them up together to fulfill each order. It's a clever combination of robotic and human workers that makes the most of what each does best at the moment. Researchers have been developing more sophisticated robot arms that could theoretically do the job of picking products out of boxes, but robotic arm technology remains better at doing the same motion over and over again rather than handling many different products such as eggs, tomatoes or soda bottles.

Space efficiency means CommonSense Robotics could place its micro fulfillment centers right inside the neighborhoods of densely-populated cities near potential customers. Grocery stores could have their usual produce and product suppliers deliver directly to the CommonSense Robotics facilities for storage and order fulfillment. And fulfilling each online order in this way could prove more cost-effective than having individual shoppers going through grocery store aisles. The only thing that the startup won't do is actual home delivery, which means grocers still need to hire contracted or full-time delivery drivers. But having the micro fulfillment centers located closer to customers in big cities should make delivery routes fairly short and time-efficient, especially in comparison with traditional package delivery runs coming from larger fulfillment centers farther out. Customers could receive their groceries within an hour of placing the order, Peled says. The startup also makes use of artificial intelligence algorithms to manage the inventories of all its future micro fulfillment centers and learn from patterns of customer orders. Those ordering patterns will likely differ for each center's neighborhood: Perhaps one grocery store's customers may really go for precooked foods or rotisserie chickens. Such popular items that get ordered frequently could eventually be stored in more accessible parts of the racks for robots to pick up. CommonSense Robotics is currently "100 percent" focused on enabling online grocery shopping. But if successful, the startup figures that its on-demand logistics system will have proved itself capable of serving the online order fulfillment needs of retailers beyond the grocery sector. After all, few online orders are more complex than dealing with a grocery list of 40 to 50 fresh food items that require multi-temperature facilities for storage. "If we can make the economics work for groceries—and we know we’re there already—we figured operations for other retailers would be easier," Peled says.