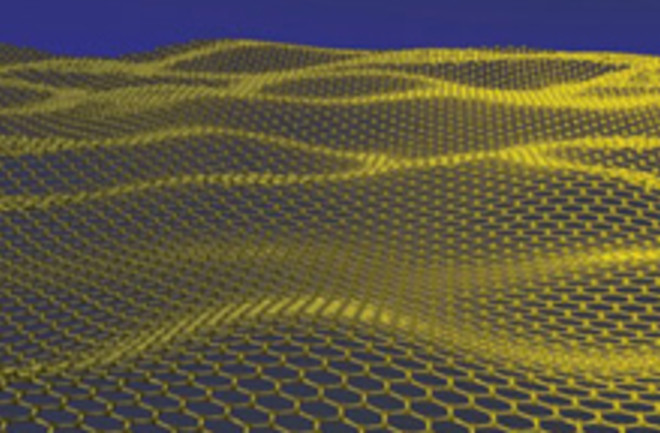 100 gigahertz of processing power—not bad for a single sheet of atoms. In a paper in Science, researchers at IBM say they have created the fastest-ever graphene transistor, with a cut-off frequency (the highest it can go without significant signal degradation) that at 100 GHz is nearly four times higher than their previous attempt. Similar silicon-based transistors have only been able to reach a turtle-like clock rate of about 40 GHz, or 40 billion cycles per second. Graphene is a sheet of carbon one atom thick, and electrons move through it extremely fast.

This is because they behave like relativistic particles with no rest mass. This, and other unusual physical and mechanical properties, means that the "wonder material" could replace silicon as the electronic material of choice and might be used to make faster transistors than any that exist today [Physics World]

. But there are down sides for application: Graphene lacks what's called a "band gap," which conventional semiconductors need to turn on and off. And it tends to degrade rather easily during production. The IBM team crafted a layer of polymer only 10 nanometers thick to protect the graphene from harm. And regarding the band gap issue, researcher Yu–Ming Lin suggested that graphene not be used for the discrete digital signals modern semiconductors deal with.

Instead, graphene is better suited for making analog transistors, such as signal processors and amplifiers. Today, such circuitry is largely made from GaAs (gallium arsenide), though GaAs offers nowhere near the same electron mobility [PC World]

. Then again, the same IBM research group may have very recently discovered how to create a band gap in graphene. So maybe silicon's days are numbered, after all. Related Content: 80beats: IBM's Billion-Neuron Simulation Can Match a Cat's Brainpower 80beats: Watson, an IBM Supercomputer, Could be the Next “Jeopardy!” Champion 80beats: To Cool Computer Chips, Tiny Water Pipes DISCOVER: Life After Silicon—How Graphene Could Revolutionize Electronics DISCOVER: The Graphene RevolutionImage: Jannik Meyer