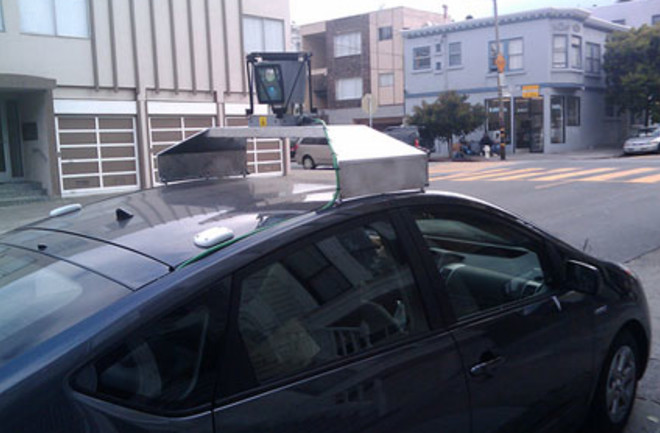 Google announced this weekend that it has been driving automated cars around California's roads, and that the vehicles have already logged about 140,000 miles. A fully automated car just finished a big trip--all the way from Google's campus in Mountain View, California to Hollywood.

Larry and Sergey founded Google because they wanted to help solve really big problems using technology. And one of the big problems we’re working on today is car safety and efficiency. Our goal is to help prevent traffic accidents, free up people’s time and reduce carbon emissions by fundamentally changing car use. [Official Google Blog]

--including cameras on the roof and in front, radars, and laser range finders--which build a detailed map of the car's surroundings. This information is transmitted to the Google servers and processed to detect and react to any obstacles that get in the car's way, mimicking the decisions a human driver would make. In the official Google blog post

about the announcement, Google said it believes automated cars could cut the number of deaths by traffic accidents by up to a half. The vehicles could also reduce car usage if more people pile into self-piloted shared cars, or what Google calls the “highway trains of tomorrow." Right now, the company doesn't have a detailed plan for how to use the technology, it seems more focused on proving that it works. And while the cars' technology is quite advanced, it will still be several years--possibly more than eight--before the cars could be commercially available. The big question looming over this computer-controlled software is safety.

And in the event of an accident, who would be liable — the person behind the wheel or the maker of the software? “The technology is ahead of the law in many areas,” said Bernard Lu, senior staff counsel for the California Department of Motor Vehicles. “If you look at the vehicle code, there are dozens of laws pertaining to the driver of a vehicle, and they all presume to have a human being operating the vehicle.” [The New York Times]

, discussing the next wave of computing: teaching computers to do the things we can't do well.

Schmidt noted that it’s ridiculous that humans and not computers drive cars. “Your car should drive itself. It just makes sense,” Schmidt said. “It’s a bug that cars were invented before computers,” Schmidt remarked. [TechCrunch]

The cars weren't able to log all of those driving miles (1,000 of which were completely human-intervention free) without being spotted. The self-driven Priuses have been caught driving along California's roads for over a year

, but most people seemed to think they were upgraded versions of Google's mapping cars

80beats: Scientists Use Google Earth to Spot a Meteor Crater in Egypt

Science Not Fiction: The Car of the Future Is Looking More Gadgetmobile Than KITT

Discoblog: How to Build a Car for Blind Drivers: With Vibro-Gloves and Air Puffs